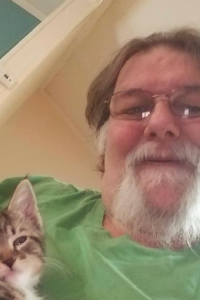 SACO- Charles "Chuck" Edward Neal, 66 yrs old, passed away peacefully at Gosnell Hospice House after a short but courageous battle with cancer with his wife and daughter at his side.
Chuck was born October 4, 1956, at Fort Dix Air Force Base, where his father was stationed.
Chuck was an amazing truck driver and was so proud of his many accomplishments and rewards he had received during his many years driving CDL. His favorite job was working for Dayton Sand and Gravel where his career ended after a terrible accident resulted in a leg amputation. He went on to help grow and establish a medical Marijuana company for a few years before retiring completely.
Chuck in his early years followed his favorite band The Grateful Dead to many shows bringing his daughter with him. He also enjoyed scenic drives, watching Nascar, spending time with his grandchildren and working in the garden.
He was preceded in death by his first wife Cecile Neal of Biddeford in 2013, and his father Phillip Neal of Florida in 2016.
He is survived by his current wife Pamela Gagne of Saco, his daughter Carie Neal of Biddeford, Chelsea Croizier of Westbrook, son Dustin Gagne of Biddeford, granddaughters Cassidy and Desirea of Biddeford, Akirah of Springvale and grandsons Daniel, Archer and Isaac of Biddeford.
Chuck's wishes were to just be cremated. He didn't want any service, only for his ashes to be spread in his favorite places. In lieu of flowers donations can be made in his name to wounded warriors or any veterans' programs.