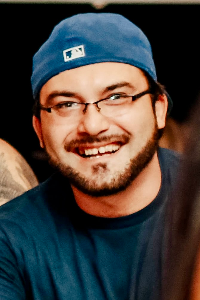 John was born to John and Wendy (Turner) Kalil in Worcester, MA on January 27, 1989. He graduated from Bartlett Highschool receiving a scholarship to attend UMASS Dartmouth for Mechanical Engineering. John was intrigued by everything that had an engine and continued learning about engines and anything related to the mechanical world.

John was raised in a musical household and developed a natural ear for it. Whether he was singing at the top of his lungs or playing an instrument John displayed a musical talent from a young age. He had learned to play the guitar as a child, and it was a source of great joy for him. He had an infinite amount of music that he cared for as his taste encompassed all genres but his favorite one of all was Country.

John was a kind and giving person who is remembered by many for having gone out of his way to lend a helping hand often and without haste. He was welcoming with his big smile and bellowing laugh. John’s charming personality and humor made him memorable if you were fortunate to meet him. He was witty and sarcastic in equal measure, and it made for unforgettable and hilarious banter. He was an animal lover and often rescued and rehabilitated birds or bunnies he came across injured in the wild. John’s favorite past times were anything that involved nature, climbing mountains, being near water and his family. He felt peaceful outdoors and it was where he would be with his children often. John favored a good book as an avid reader and a night in as well. He will be immeasurably missed by the people who knew and loved him and thought of often for all of his unique qualities.

John is survived by his Fiancé Blair Morgan-Dota and their children; Jordyn A. Beals, Jaxson J. Kalil and Charlotte N.J. Kalil. He is also survived by his siblings; Melissa S. Delaurie and her husband Benjamin R. Delaurie; his sisters; Tia L. Kalil and Jackie Freeman; and his brother Christopher R. Kalil. He is also survived by his uncle, Randy P. Turner and his daughter Erica E. Walters; and his uncle Robert Harpin. John also leaves behind eight beloved nieces and nephews whom he cherished.
He is preceded by his parents, and uncle Jeffrey G. Turner.

Services will be held privately.