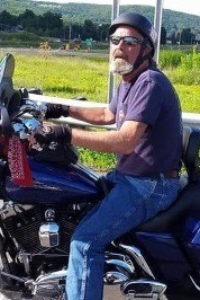 Frank R. Durkee 66, of Franklin and a former resident of Marlborough, passed away, peacefully Monday November 21, 2022 at Milford Regional Medical Center, following a courageous battle with cancer. He was the beloved husband of Cynthia M. "Cindy” (Woodworth) Durkee, with whom he shared 42 years of marriage.

He is survived by his son F. Ryan Durkee and his wife Rachel DeBlois-Durkee, his grandson, Mark D Robinson, his sisters, Becky Macora and her husband Bill, Sandra Durkee and her partner Rebecca Remillard, and Patty Mula and brother-in-law Fred, as well as brother-in-law Lynn “Pork” Prashaw. In-Laws Woody and Pat Woodworth, as well as Betty and Bruce Pratt, and Wendy and Steve Donahue. Another In-Law, Bette Smith.

He was pre-deceased by his parents Elaine and Frank R. “Bob” Durkee, and his daughter Kimberly Durkee.

Better known as “Dick”, he is also survived by a very large amount of nephews and one niece, Erin aka “Brat”. Also, one aunt and many cousins b

Dick lived a life that many were a part of. From his early days playing sports, to joining the Marines, and then continuing his life filled with friends and family.

He enjoyed camping, golfing, traveling with his wife and friends, and being a father. Dick’s major enjoyment in his life was riding his Harley anywhere and everywhere he could. He has traveled all over the USA on his bike and wouldn’t have wanted it any other way.

In addition to his hobbies, Dick was the founder and creator of the Marlboro Eagle Riders Group. They, along with others, enjoy riding and raising money for those that need a helping hand.

Relatives and friends are invited to attend his funeral Mass Monday November 28th, in St. Mary’s Church, 1 Church Square Franklin at 10AM.

Interment with military honors will follow at the parish cemetery.

In lieu of flowers, a memorial foundation has been created for Dad. Dick Durkee Memorial Charity Fund is where donations can be sent. To donate, please contact Cindy or Ryan.