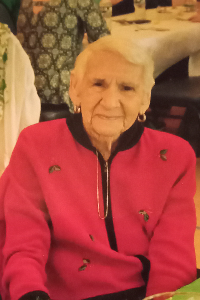 Barbara Mae Jordan, died at 91, in the South Shore Hospital in Weymouth, Massachusetts. She was born on July 25, 1931 in Canada.

Barbara was a devout and active member of the Union Congregational Church of Wollaston, Massachusetts. She was part of the Marty Club.

Her children were prolific sports players. Warren Jordan excelled in college football. Laura and Linda were also talented athletes that played basketball in church and high school. Barbara Jordan never missed a game and was fully involved in their extracurricular endeavors due to her supporting, compassionate, and caring nature.

Barbara Jordan was the founder and president of the "Red Hats Society" in her home neighborhood Leisurewoods, Rockland, MA. She started a fitness program and headed it for 28 years in the Leisurewoods Clubhouse which incentivized neighbors and friends to improve their diet, exercise routine, and lifestyle. It provided opportunities previously unavailable in the neighborhood to take advantage of unique health benefits. For all of Leisurewoods and its residents, Barbara also organized many live entertainment trips.

Barbara Mae Jordan lives in the memory of each family member, all of which will remember her for her clever humor, gracious generosity, and passionate soul. She will be resting and buried with her late husband Robert “Bob” Jordan in Cape Cod, MA.

Her funeral services will be held on Saturday November 26th at 10:00AM in the Blanchard Funeral Chapel, Plymouth St.reet (Rte. 58 @ the rotary) Whitman. Her visitation will be on Friday November 25th from 4:00-7:00PM in the Chapel. Burial will be in the Massachusetts National Cemetery on Monday.