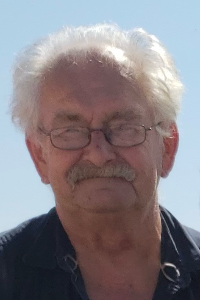 
George H. Roscoe, 74, of Derry, NH, died Saturday November 19, 2022 in the Brigham and Women's Hospital in Boston, MA. He was born in Lowell, MA on September 10, 1948, a son of the late George Roscoe and Joyce (Silcox) Frazee. He had been a resident of Derry since 1991, formerly living in Lowell. Mr. Roscoe was a US Army veteran serving during the Vietnam era. He had been employed for the US Postal Service for over 35 years. Some of his favorite activities included fishing, visiting the New Hampshire Great Lakes, playing Keno, and having a beer with friends. George always brought a happy attitude to everything he did. He was known in Methuen as the “singing mailman” for the way he’d drop off mail. He especially enjoyed hosting Thanksgiving with family and making his famous pumpkin pie.

Following cremation, the family will hold services at a later date. The Peabody Funeral Homes and Crematorium of Derry and Londonderry assisting the family with arrangements.