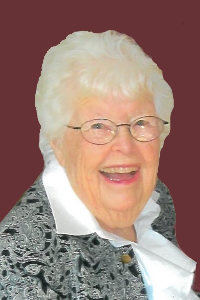 LACONIA ---- Mary A. Wadsworth, 101, passed away peacefully on Thursday, November 17, 2022 in her beloved home having lived a full and rich life.

She was born in Woburn, MA on January 2, 1921, the third child of Walter and Mary (Morley) Brennan. Mary graduated from Woburn High School, class of 1939, and completed secretarial courses in Boston, ultimately securing a clerical position at Merrimac Chemical Co. in Everett, MA. It was there she met her future husband Harry, who was employed in the shipping department and jumped at the chance to be introduced to the company’s charming new secretary. They were married on June 8, 1944 in Ft. Benning, GA just a few days before Harry shipped out to serve as a US Army medical technician in England for the remainder of the war. During the years that followed, Mary and Harry enjoyed all that Boston had to offer, with late nights dancing to big band music, searching out all the best jazz clubs and making frequent visits to the Museum of Fine Arts.

In the early 1950s, after a trip to Lake Winnipesaukee that included swing music at Irwin’s Pier on Weirs Beach, Mary and Harry fell in love with the area and made the decision to move north to raise their family, settling first in Meredith and then building a home on Morningside Dr. in Laconia where Mary resided until her passing. They formed a strong team, Harry’s work in sales required extensive travel, so Mary took charge of running the household and raising three children. Summer weekends were spent visiting island friends and exploring the far reaches of the big lake aboard the family boat, a 1948 wooden Maine cruiser named Downeaster. Mary supported Harry’s love of wooden boats and each spring you could find her in the boatyard, performing the yearly ritual of scraping, sanding and painting. She encouraged her kids to pursue sports and the arts, especially music, allowing rock band practice in the basement.

She enjoyed a round of golf with her friends and played regularly at the Laconia Country Club for many years. While Mary’s main focus was always on her family, she took time each day to pursue her lifelong passion for reading. Her taste was varied and adventurous and she was always on the hunt for the next great novel. After Harry’s passing in 1999, Mary joined the Community Wellness Center where she made new friends and volunteered in the office for several years. She often joked that she started out as a file clerk and ended up as one too.

When grandchildren joined the family, Mary became Grandmary and she formed a unique and special relationship with each one. As the grandchildren married and the family grew, Mary welcomed each new member with love. She was a good listener, took pride in accomplishments, consoled losses and taught the importance of resilience. In her mid-nineties, Mary learned to send text messages so she could better communicate with her grandkids and her circle of young friends. A Red Sox fan her entire life, Mary rejoiced when they won the World Series in 2004, it was a long wait. She was a member of the Winnipesaukee Yacht Club for seventy years; in addition to boating, she enjoyed the club’s beautiful waterfront and time spent with her many friends. Mary was a communicant of St. Andre Bessette Parish in Laconia.

Mary was predeceased by her husband of fifty-five years, Harry F. Wadsworth, as well as her brothers Gordon Brennan and Lawrence Brennan and sister Claire (Brennan) Ryan.

The family would like to thank all of Mary’s caregivers, friends and neighbors who worked so hard to keep her comfortable in her home.

The family burial will be private.

A Celebration of Life is planned for early summer 2023.

Wilkinson-Beane-Simoneau-Paquette Funeral Home & Cremation Services/603Cremations.com, 164 Pleasant Street, Laconia, is in charge of the arrangements. For more information and to view an on-line memorial, go to www.wilkinsonbeane.com.