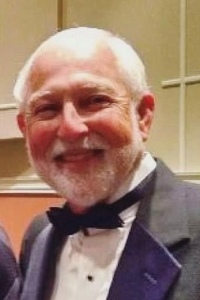 Bill was a native of Eufaula, Alabama, born on November 12, 1943, to Lloyd and Mattie Lou Belcher. During middle and high school, he participated in the band program, learning to play the trumpet, where his love for music began.

Bill proudly attended Troy State University and graduated in 1968 with a Bachelor’s Degree in Music Education. His first job as a band director was in Union Springs, Alabama at Bullock High School. In 1970, he interviewed at Tift County High School in Tifton, Georgia and was asked if he could compete with Valdosta. He answered, “Valdosta who?”, and needless to say, was hired on the spot as the band director! With his incredible talent and gift of teaching, he led the Tift County Blue Devil Band to be highly successful, winning many awards in marching and concert band for the next ten years. He grew the band program from ninety to over two hundred and fifty students. His drive for excellence allowed many competitive opportunities to receive first place in field shows and superior ratings in concert band. The Blue Machine was well known in the Southeast, performing in the marching exhibition at the National Band Association in Knoxville, Tennessee to St. Petersburg, Florida, competing in the Festival of States representing the state of Georgia. During this time, Bill also returned to his alma mater as a clinician for summer band camps, where he impacted many with his talent of teaching and directing.

In 1980, Bill transitioned his ambitions into school fundraising and was quickly awarded top seller/fundraiser for the companies Network and Promar. He also worked for Conn in band instrument sales and again was awarded top seller. Bill became a sales representative for M&M Music in Valdosta, Georgia and Portman Music in Savannah, Georgia. He was so successful that he opened his own music store, Belcher Music, in Tifton, Georgia. That same year, in 1985, he and his wife, Gayle, founded Southern Resources, a school fundraising company. With Gayle by his side, they were able to serve an abundance of the schools in the South Georgia area with fundraising opportunities, which is still in existence today. He also founded Southern Limousine in 2006, where he awarded the student top sellers, a day out, chauffeuring them in his limousine to a fun lunch with dessert!

He returned to teaching at Irwin County High School in Ocilla, Georgia as the band director from 2008-2012 and from 2017-2018. He proudly led the marching Big Red Band to success with his all-inspiring passion, receiving many awards for their performances. In 2012, their dreams of performing at half time for the Sugar Bowl in New Orleans became a reality.

Bill continued to use his musical talent throughout his lifetime by judging numerous field competitions across the U.S. and Canada, as well as being on the judging panel for the Festival of States in St. Petersburg, Florida. He was a member of the Southeastern United States Concert Band Clinic Board of Directors. In October of 2022, Bill was inducted into the National High School Band Directors Hall of Fame. He was not only a teacher but an entrepreneur, a leader, mentor, friend and role model to all who had the privilege to be in his presence. He was admired, loved and respected. His accomplishments were great, his impact extraordinary, and his legacy will last forever.

Bill was an active member of St. Anne’s Episcopal Church in Tifton, Georgia. He served on the vestry as senior warden and became the choir director. When Bill was not teaching or serving others, he could be found on the golf course, fishing, or driving his boat in Panama City, Florida. He was a grill master and encouraged his children and grandchildren that sometimes, no matter the circumstances or occasion, "you just gotta pick up that t-bone steak and gnaw it!" He also loved seafood and could be found once a week dining at Charles Seafood in Tifton, or at Hunt’s Oyster Bar anytime he was in Panama City. He loved the Atlanta Braves and was an avid Alabama fan, with an undying disdain for Auburn! His humor was infectious, and all enjoyed the laughter his story telling would bring.

In addition to his parents, Bill was preceded in death by his sister, Cheryl Belcher Trawick and sons, Mike Graves and Jeff Graves.