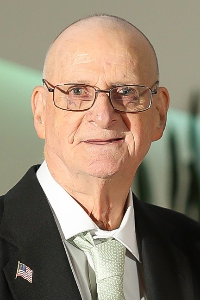 Majella Adrian Smith, 90, of New Bedford died peacefully November 16, 2022 at Charlton Memorial Hospital surrounded by his family. He was the husband of 63 years to Sylvia A. (Cassidy) Smith. Born in Argentia, Newfoundland, son of the late Anthony J. and Johannah M. (Doody) Smith, he lived in New Bedford most of his life.

Mr. Smith was formerly employed by Acushnet Company Rubber Division for over 30 years until his retirement. He also managed McGee's Sporting Goods many years ago. He was a communicant of Holy Name of the Sacred Heart of Jesus Church. He served in the U.S. Army during the Korean War and was awarded the Bronze Star with Valor. Mr. Smith enjoyed fishing with his nephew Wayne and sitting and having coffee with his sister Betty.

Private First Class ADRIAN M SMITH, 1851212753, Infantry, United States Army. Private SMITH, a member of an infantry company, is cited for heroism in action against the enemy in the vicinity of Pau-gol, Korea. During the early morning hours of 15 July 1953, Private SMITH's unit was subjected to an intense enemy mortar and artillery barrage. Following the barrage, the foe launched a vicious ground attack on the friendly positions. When the forward elements of the friendly force called for additional ammunition, Private SMITH immediately volunteered for the hazardous mission. Exposing himself to the murderous hostile barrage, he delivered a sorely needed ammunition and on his return he helped carry the wounded to the safety of the aid station. He continued this perilous task for several hours, demonstrating his outstanding devotion to his comrades as he was instrumental in saving several of their lives. Private SMITH's exhibited heroism and exceptional devotion to duty reflect great credit upon himself and the military service. Entered the Federal service from Massachusetts.