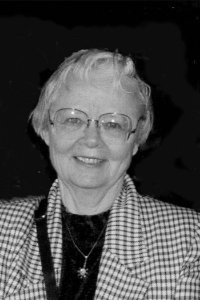 Lucy Johnson Jensen, beloved mother and grandmother, artist, bibliophile, and librarian, died on November 10th, 2022 in Needham MA, at the age of 92.

Lucy was born on March 21st, 1930, in Park Slope, Brooklyn, New York, the daughter of Virginia Markey Johnson and George Henry Johnson. An adventurer from an early age, as a child she would set out with a sandwich to walk Brooklyn, exploring the city with solo expeditions to Red Hook, Greenwood Cemetery, Coney Island, etc. As Lucy’s parents believed in progressive education she was initially educated at The Woodward School in Brooklyn, and later enrolled at Packer Collegiate Institute in Brooklyn, her family having moved to Brooklyn Heights. An avid Brooklyn Dodgers fan, she often cut school in her teenage years to attend triple-headers at Ebbetts Field. Lucy graduated from Packer in 1948, then from Mount Holyoke College in 1952. A French major, a formative experience in college was her junior year abroad in post-war Paris, where she discovered wine and cheese, and developed a life-long love of travel.

Lucy worked for the Grolier Publishing Company following college as a picture researcher for a children’s encyclopedia, The Book of Knowledge. Later, she returned to graduate school to earn an MA in Library Science from Columbia University. Subsequently, Lucy worked as a librarian at New Lincoln School and Regis High School, as well as in the library at Bellevue Hospital.

In 1953 Lucy met a young accountant from Iowa Falls, Iowa, Bryant I. Jensen, and they married in 1955. They lived in Peter Cooper Village in Manhattan, later building a cottage in Beachwood in Stockbridge, Massachusetts, where they spent summers and braved occasional cold winter weekends. Lucy is survived by two daughters, Natalie Markey Jensen, of Dedham MA, and Phebe Clare Jensen, of Hyde Park, Utah; sons-in-law Jim Ray of Dedham and Paul Crumbley of Hyde Park; granddaughters Nell Crumbley, Julia Ray, and Emma Crumbley, all of Brooklyn; and grandson Nicholas Ray, of Asheville, North Carolina. Her husband preceded her in death in 1984.

Lucy’s life was defined by a love of books, art, music, wine, cheese, the hunt for a good bargain, the search for the perfect tchotchke, and adoration for her grandchildren. She and her husband were avid opera goers, with a special dedication to Beverly Sills of New York City Opera fame in the 1970s. Lucy’s art book collection was legendary. Throughout her adult life Lucy studied painting and drawing, taking classes at the Art Students League in New York, in Stockbridge, and later in Walpole, MA, where she moved in 2004. Her paintings, sketches, and watercolors now adorn the walls of the houses of her children and grandchildren. Lively, fun, and brilliant, an adventurer in her native New York who also traveled the world whenever possible, she was always the life of the party, and she maintained lifelong friendships. Lucy will be laid to rest in July 2023 in Stockbridge Cemetery, alongside her husband. She will be deeply missed.