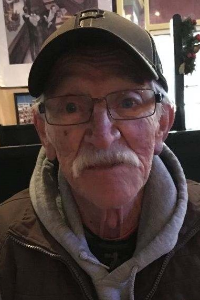 On March 19, 1959 he married the former Leona Anderson. They shared over fifty-four years of marriage together until her death on September 19, 2013.

Herb worked as an electrician at the Greenwich Collieries for over thirty years and retired at the age of 59. He also was known for his skillfulness in painting cars.

He thoroughly enjoyed being around kids. For years, Herb coached baseball for the Hillsdale Little League. In the last twenty years, he had never missed a Purchase Line High School Football game.

In the 1960’s, Herb was the fire chief for the Commodore Volunteer Fire Company. He was a social member of the Clymer and Glen Campbell American Legions.
Herb lived for his grandchildren, whom he dearly loved.

In addition to his wife Leona, Herb was preceded in death by his parents; his brother, James Gach and his sister, Mary Rose Lundberg.

Memorial Contributions may be made to St. Jude Children’s Hospital at 262 Danny Thomas Place, Memphis, TN 38105 or online at [email protected]