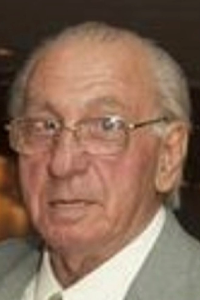 Stanley G. D’Orsi Sr., 90, Born in Providence, a 62 year resident of Greenville, died Thursday, November 17, 2022, He was the husband of the late Alice D’Orsi (Ferrucci) D'Orsi. They had been married for 65 at the time of her death in 2021.
He was the son of the late Armand Sr. and Margaret (Sahagian) D’Orsi. Stanley served in the US Army during the Korean Conflict stationed in Germany. He was a 40 plus year member of Teamsters Local 251, East Providence R.I. retiring in 1992. He was employed by Narragansett Improvement Company, and multiple other Construction & Freight companies.
He was also past President of the former Centerdale Workingman’s Club of North Providence.
Stanley was the father of Michael D’Orsi of Patterson NY, and Margaret-Linda Peltier of Lincoln, Grandfather of Jessica Tompkins of Dover Plains NY, Jonathan D’Orsi of Highland NY, Catherine Christiansen of N. Smithfield, Stephanie Peltier of Glocester, & Cody Powers of Patterson NY, and Rebecca D’Orsi. He was the proud Great Grandfather of PollyAnna, Avery, Alexis, Logan, Jacob & Scarlet. He is also survived by numerous nephews & neices.
Besides his parents and wife, Stanley was predeceased by his son Stanley Jr., and his brothers Robert P. D’Orsi, and Armand D’Orsi Jr.
His funeral service will be held Monday November 21, 2022 at 9am.at Anderson Winfield Funeral Home, Rt 44 at Greenville Common, Greenville. Visitation will be Monday moring, 8-9am. Burial will follow in St. Ann's Cemetery, Cranston.