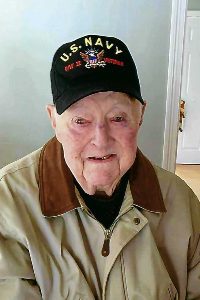 Earl Francis Derick, Jr. 95, of Bellingham, MA passed away peacefully Wednesday, November 16, at home following a lengthy illness. He was the beloved husband of the late Loraine C. (Ryan) Derick.

He was born in Cambridge, MA, May 14, 1927 and was the son of the late Earl F. Derick Sr. and Esther M. (Harney) Derick. He was raised in Watertown, MA. He later moved to Natick, MA where is raised his family.

He enlisted in the Navy, with his parents’ permission at age 17. He was a Veteran of WWII and the Korean Conflict. He served as a Seaman 1st Class on the USS Caloosahatchee. Upon discharge from the Navy he joined the US Air Marines. He was awarded the Victory Medal and the American Area Medal.

He married his wife Loraine in September 1952 and they were happily married for sixty-three years.

Following his discharge from the service, he worked as a butcher later changing careers and becoming a Natick, MA firefighter. He stayed on the department until his retirement. Post retirement he and his wife moved to Alexandria, NH to a home he built himself.  While in New Hampshire he enjoyed snowmobiling and flyfishing. He was a life long member of the Elks Club.

Deciding retirement was not for him he worked part-time as a butcher at a local lakeside store.

At age 91, due to declining health he relocated to Bellingham, MA to live with his son and daughter-in-law.
He is survived by his two children, John Derick and his wife Patricia (King) of Bellingham and Diane Murphy and her husband John of Waltham, MA. He is further survived by his sister RoseMary Colleran of TeaTicket, MA, 8 grandchildren and 7 great-grandchildren.

He was predeceased by his son Earl F. Derick, III.

Relatives and friends are invited to attend a funeral Mass in honor of Earl & Loraine Thursday December 1st, in St. Mary's Church, 1 Church Square Franklin at 10AM.

In lieu of flowers, donations in their memory may be sent to a charity of one's choice.