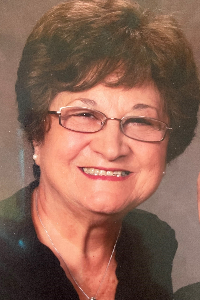 Annette C. Kloc, 83, of Hawkins Street, Greenville, died Wednesday, November 16, 2022 at Miriam Hospital in Providence. She was the beloved wife of Walter Kloc. They had been married for 53 years.

Born in Providence, she was the daughter of the late Charles and Nilda (Greco) Cintolo. She had most recently lived in Greenville and had previously lived in Providence and Cranston. She was a graduate of Bryant College, class of 1959.

Annette first worked for a doctor on Federal Hill. She later worked for the form New England Telephone Company. and the Providence housing authority for 20 years retiring in 2009. She left the workforce for 15 years to take care of her growing family who lovingly learned to “walk the line”.

Annette’s passions were gardening and cooking multi-course dinners for her family and friends on birthdays and holidays using her home grown produce. She also enjoyed reading and dancing with her husband to polkas and country music. She enjoyed traveling with her husband, especially to Italy where her family roots are.

Annette was very helpful to everyone and had a calming personality. She taught CCD at St. Philips Church and was a cub scout den mother.

Besides her husband, she is survived by her children: Walter Kloc and his wife Wendy of Exeter NH, Michael Kloc of Providence, Denise Clark of Greenville, Jason Kloc and his wife Jennifer of North Providence And her grandchildren: Nicholas Clark, Abigail Kloc, Kaitlyn Kloc and Owen Kloc. She was the sister of the late Charles Cintolo.

Her funeral will be held Tuesday at 9am from the Anderson-Winfield Home, Rt 44 at Greenville Common, Greenville. Mass of Christian Burial at 10am in St. Philip Church, 622 Putnam Pike, Greenville. Visitation Monday 4-7pm. Burial will be in St. Ann’s Cemetery, Cranston.