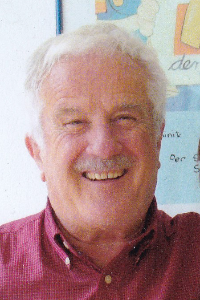 Henri W. Gautschi, 82, of Old Tavern Lane, Smithfield, passed away on Sunday November 13th at his home. He was the life partner of Deborah D. “Deb” Bowers.

Born in St. Gallen, Switzerland, a son of the late Henri and Melani (Wettach) Gautschi. He had lived in the Greenville section of Smithfield for 18 years previously living in Cranston.

Henri had served in the Swiss Armed Forces before he emigrated to the United States. Henri had been an International Travel Consultant for AAA of New England, American Express, Thomas Cook Travel and Crimson Travel. He had also the owner and operator of North Central Flight Center of Southern New England based at North Central airport in Smithfield. He had been a member of AOPA, Aircraft Owners and Pilots Association.

We would like to think back and remember Henri as a well-known traveler, with a wonderful personality that all his travel passengers truly appreciated. He traveled the world, plastic bag in hand, chaperoning his followers, guiding them through an international adventure, he will always remain unforgettable.

He circumnavigated the world at least 6 times, knew the world like the back of his hand; a good restaurant in LA, a boutique souvenir shop in Sydney, a bar in Santiago, Henri always knew where to go!

He leaves no immediate survivors

Visitation will be held on Sunday November 20th from 4-6pm in the Anderson-Winfield Funeral Home, Route 44 at Greenville Common, Greenville. A Committal Service will be held at 11:45am, Monday, November 21st in the Chapel at St. Ann’s Cemetery, Cranston. Interment will follow.

In lieu of flowers donations in Henri’s memory may be made to the RI Community Food Bank, 200 Niantic Avenue, Providence, RI 02907
www.rifoodbank.org