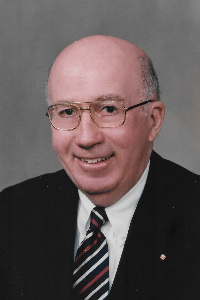 LOONEY, Jr., Dennis J. of Wellesley, on November 15, 2022. He was the son of the late Dennis J. Looney and Rosalie A. (Gallagher) Looney and was the beloved husband for 60 years of Marie Murphy Looney. He was the devoted father of Susan M. Looney of Wellesley and William G. Looney and his wife, Jennifer W. Looney of Dudley. He was also the loving and doting grandfather of Katerina and Andre’ Looney. He was predeceased by his two sons, Dennis, III and Joseph both of whom died in infancy and by his brother, David.

His life’s focus was his family and his faith. In 1952, he graduated from Boston College High School and in 1956 from Harvard College after which he served for four years as an intelligence officer in the U.S. Navy. That was followed by an almost 40-year career in the insurance business from which he retired as a senior executive of the Commercial Union Insurance Company. He was a Knight Grand Cross in the Order of the Holy Sepulchre of Jerusalem. In 2000, he assumed responsibility for the Order’s activities in the Northeastern U.S. Following that, he was appointed a member of the Order’s governing body, the Grand Magisterium in Rome. He served as a member of the Board of Governors and Club Secretary of the Harvard Club of Boston and in 1996 served as the chairman of the 40th Reunion of his class at Harvard. For over 50 years he was a resident of Wellesley and an active volunteer and parishioner of St. Paul Church.

Memorial donations in his honor may be made to Pope St. John XXIII National Seminary, 558 South St., Weston, MA 02493 or the Order of the Holy Sepulchre of Jerusalem, 18 Chestnut St., Worcester MA 01608.