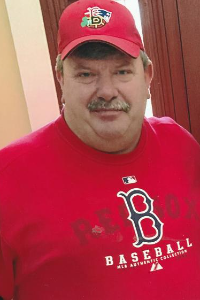 We are heartbroken to announce the passing of Douglas James Sullivan of Sharon, MA on
November 14, 2022, at home. Doug’s death was unexpected. He was born in Dorchester, MA.He moved to Sharon in 1973 and attended Sharon Schools. He attended Southeastern Regional Vocational High School. He later obtained his Master’s Carpenter’s License. He began his career with Carmone Corp., followed by John Alden Construction and a short time on his own. He later worked for Home Depot, and since 2015 with Econocorp Inc in Randolph. Doug spent much of his time at the Sharon VFW surrounded by his friends. He was a member of the American Legion in Sharon. He spent multiple hours volunteering at the VFW and American Legion. He was the President of the Canton Gun Club for many years. He loved to ride his Harley on which he traveled to Laconia, NH & Milwaukee, WI for the 100th HD Anniversary, among other places. He enjoyed hunting and snowmobiling. Mostly, he loved spending time at the lake house in Barrington, NH with family and friends. He leaves behind his 2 children Mekayla and Connor Sullivan of Sharon, his mother Jean Sullivan of Sharon, his siblings and their spouses, Danette and Joe Bruno of N. Chelmsford, Kerry and Gary Schubert of Norton, Sean Sullivan of Hooksett, NH, and Daniel and Colleen Sullivan of Brockton. He also leaves behind his nieces and nephews. Anthony, Heather, Jennifer, Danielle, Kimberly, and Jacklyn. Visiting hours in the Dockray & Thomas Funeral Home 455 Washington St. Canton on Monday Nov. 21st from 4-8 pm.. A Mass of Christian Burial will be held at Our Lady of Sorrows, Sharon on Tuesday morning at 10:00. Relatives and friends are respectfully invited to attend. Burial Rock Ridge Cemetery, Sharon.