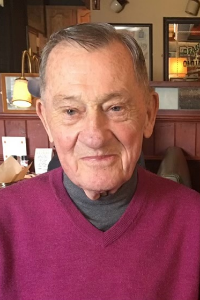 John P. “Butch” Vail, 87, of Leicester, passed away peacefully Monday, November 14th in St. Vincent Hospital surrounded by his family. He leaves two sons, John M. Vail of Leicester, and James W. Vail and his wife, Cindy of Grafton; a daughter, Jennifer L. Lavin and her husband, Christopher of Leicester; five grandchildren; Sean Vail and his wife, Shannon, Connor Lavin, Jackson Vail, Mackenzie Lavin and Zoie Vail; two grandchildren, Jonathan and Rory Vail; a brother-in-law James Hardiman and his wife, Rose of Westborough; and many nieces and nephews. He was predeceased by his wife of 60 years in 2019, Mary E. (Hardiman) Vail; two brothers, William and Robert Vail; two sisters, Virginia Planachek and Alice Birkbeck.
He was born in Worcester the son of Robert and Alice (Houston) Vail. He attended St. Peter’s Catholic High School and Worcester Academy where he was a standout athlete in baseball, basketball, and football. He later received his bachelor’s degree from Assumption University. He was a longtime member of Our Lady of the Angels Church. Butch was a claim adjuster for over 30 years with Sentry Insurance. He was the head football and baseball coach at St. Peter’s from 1962-1977 and then head coach for the football team at Holy Name High School from 1979-1985. Butch was later inducted into the hall of fame at both St. Peter’s and Holy Name. After retiring in 1996, Butch worked at Cyprian Keyes Golf Club in Boylston. In his free time, he was an avid golfer and a member of the Growlers at Hillcrest Country Club in Leicester and enjoyed watching all of the New England sports teams. Most of all, Butch loved to spend time with his beloved family and would always look forward to the next get together.