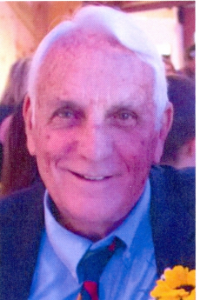 David D. Scully, a proud, loving, Irish, sparkling-eyed man of great faith and conviction entered into eternal life on Saturday, November 12, 2022 at his home, with his loving wife, Wilma Rivard Scully by his side.

David graduated from Taunton High School in 1951, where he played football and ran track. Following graduation David served his country proudly in the Navy from 1951-1955 as a member of the United States Naval Construction Battalion, better known as the Seabees. He was on Active Duty in the Korean War.

Dave played Semi-Professional Football for the Taunton Herrings, the Middleboro Cobras and the Attleboro Jewelers.

Having attended high school together and after several years together, Dave married, “His one and only true love,” Wilma Rivard Scully on February 22, 1963. Together they raised their son Scott Gallego who predeceased them in 1995. Their 64 years together, and 59 years of marriage was one of their greatest blessings. Of all the titles he held over the course of his lifetime, being Wilma’s husband was the one that he cherished the most.

David’s charismatic personality and zest for people was evident in everything he did, in particular his work. In his early years he worked as a salesman for Super Tire in Bridgewater before beginning a career in the shipping industry. His career in the container shipping industry spanned 27 years, and was a source of great pride for him. He worked for the Sea Land Corporation when it was the largest container carrier in the world, the Delta Shipping Lines, and Navieras de Puerto Rico where he retired as the Senior Vice President of Sales and Marketing. His career led he and Wilma to live in various locations around the United States including Philadelphia PA, Colts Neck NJ and Jacksonville FL before they retired, living in Cape Cod and Florida until returning home to Taunton in 2012.

Dave had a passion for many things, chiefly his extended family that includes scores of nieces, nephews, great nephews and nieces. He “kept tabs” on each and every one of them, and shared wisdom and advice readily with all. To know Dave was to love him, as was the case with his numerous friends to whom he showed great devotion. Dave had a passion for Stock Car races, and traveled with friends often to watch races far and near. He also took great pride in tending to every detail of his home and yard.

David was a devout Catholic who enjoyed connecting with his parish priests and considered them to be dear friends. He was a communicant of Holy Family Church in East Taunton, MA.

David D. Scully will be remembered as a person who made it his mission to do for others while never asking for anything in return. He will live on in the hearts of his family and friends forever.