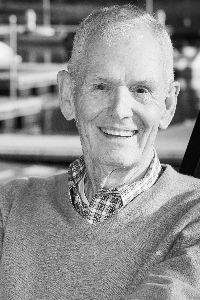 Wallace Irving Stimpson (Wally) of Needham, MA and Naples, FL passed away on November 11, 2022 at Massachusetts General Hospital in the loving embrace of his close family. He was 85 years old. A businessman, accomplished athlete, and Naval Veteran, his large family was the driving force of his life. He is survived by his wife of 62 years Susan Gilder Stimpson, his four children and thirteen grandchildren: John Stimpson and his wife Carolyn of Princeton, MA and their sons John, Chris and Sam; Peg Gaillard and her husband Tom of Boston, MA and their children Wallis, Charlie and Katharine; Ginny Vatcher and her husband Steve of Kennebunk, ME and their children Jack, Teddy, Annie and Charlotte; and Ted Stimpson and his wife Nicole of Weston, MA and their children Maggie, Ellie and Alex. He also leaves his brother John Williams Stimpson and his wife Trish of Lakeville, CT and was predeceased by his brother Edward Sutton Stimpson III and by his parents Margaret Williams Stimpson and Edward Sutton Stimpson II.

Born on June 8, 1937, Wally spent his youth in Newton and Wellesley, MA and graduated in 1955 from Noble & Greenough School in Dedham. He went on to attend Harvard College where he graduated Magna Cum Laude in 1959 with a degree in Mathematics, sang with the Harvard Glee Club and played on the Varsity Squash team when they won a National Championship. In the spring of his senior year he was the best man in his roommate’s wedding and fell head-over heels in love with the maid-of-honor, Susie Gilder. After graduation, he joined the Navy as an officer and was deployed on the destroyer leader USS Norfolk. Less than a year later, while on leave, he flew back to Minneapolis to marry Susie.

He attended Harvard Business School from 1962 to 1964 and soon after began his career in northern California with Kaiser Aluminum. In 1969 he accepted the opportunity to become a founding partner in the management consulting firm, Applied Decision Systems. He, Susie, the four kids and their little dog Timmy packed up the VW van and camped their way back across the country where they settled in Wellesley. ADS merged with Temple Barker and Sloane and was eventually acquired by Marsh McClennan which became Mercer Management. His most notable professional accomplishment was an innovative, computer-based, management decision game called WISE. The cutting-edge program was used by countless companies and business schools around the country including HBS and AT&T. Among his many leadership positions, Wally served on the board of trustees for Noble and Greenough School from 1983 to 1993 and most recently was President of the Naples Council on World Affairs.

Wally was a two-term president of the Longwood Cricket Club and got his senior USTA amateur ranking as high as 7th in New England. Once he retired from competitive tennis, he refocused his athletic energy on golf. He joined the United States Senior Golf Association and traveled the country with Susie racking up wins and collecting plates from countless USSGA tournaments. He loved the game of golf, became a rules official, had three holes-in-one and was particularly proud of his father’s invention, the “Stimpmeter”, which measures the speed of a green. He was a member of The Country Club in Brookline and Hole-in-the-Wall Golf Club in Naples.

His lifelong love of music was a constant source of joy which he passed along to his children. He was an accomplished pianist, sang in the church choir in Wellesley and in Naples, and joined the Barbershop Quartet at North Hill with whom he sang as long as he was able.

He and Susie hosted their ever-growing clan of Stimpsons, Gaillards, and Vatchers, (affectionately known as the Stimpvatchaillards) every year for the last 25 years at his favorite place in the world, The Basin Harbor Club on Vermont’s Lake Champlain. That tradition and the memories created there were among the highlights of his life.

Wally fought bravely for the last several months until Non-Hodgkins Lymphoma got the better of him, but he never lost his warm smile and clever wit. His analytical, detail-oriented mind was
sharp to the end as was his devotion to Susie, his children and his grandchildren. His family is extraordinarily grateful to the doctors and nurses at MGH and the staff at North Hill for their loving care.

A memorial service will be held at the Wellesley Village Church, 2 Central St. Wellesley, MA on Friday, December 2nd at 1:00PM and will be available for live-streaming on their website, www.wellesleyvillagechurch.org. A reception will follow at The Country Club, in Brookline, MA.