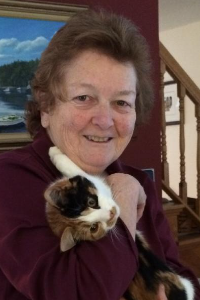 STANDISH- Beverly Hall died peacefully early Monday, November 14th, at home surrounded by loved ones. She was 74.
Daughter of Donald and Pearle Hall, Bev grew up in the little town of Wales (then pop. 400) and graduated from Lewiston High School in 1967. Immediately after graduating, she moved to Portland and began her training as an EEG technologist. She loved Portland and her job, and EEG’s became her life’s work until retirement. She was proud of the work she did and strived for excellence in her field. She was the first person in Maine to become a registered EEG Technologist (R. EEG T.) and then became registered in evoked potentials (R. EP T.) as well. Later she attended night classes and graduated magna cum laude from Westbrook College earning her Bachelors Degree in business administration in 1983. She worked with many neurologists in the area before retiring as head technologist and lab manager at Maine Neurology. During her career, she trained and mentored several others, many who are still in the field in various parts of the country and who have remained friends. She was active in local, regional and national EEG societies, always promoting the education and registration of EEG technologists to ensure quality care. She was widely respected and made countless friends along the way.

Bev enjoyed life. She loved going to concerts and always seem to snag the best seats in the house for herself and the people she took with her. She also enjoyed cooking and was a wonderful cook as her friends would attest to. She loved to travel with her friend Janet, and of all the destinations, her favorites were the Turks & Caicos and Ocean Point, Maine, both of which became annual trips for over two decades. Through the years, many others joined them at both locations. Bev’s other interests included bowling, golf, tennis, and crossword puzzles. In 1984, Bev and her best friend, Janet built a home in Standish where she lived the rest of her life.

Bev was the kind of person whom you liked immediately when you met her. She was genuinely interested in you and became an instant friend forever. She was known as “Aunt Bev” to many, either by relation or love and took her Aunt responsibilities seriously. She would always send cards on birthdays and every other holiday (with a couple of dollars tucked inside), and be at the ready to listen and offer advice when asked. She was also the person to call for recipes, names of actors, and driving directions.

For the last several years, Bev lived with pulmonary fibrosis, a double lung transplant, chronic rejection, and then cancer. During all that time, she never felt sorry for herself and was the face of courage and grace. She showed kindness to everyone regardless of how she was feeling. She had many wonderful healthcare people along the way including Jane who came to help out over four years ago, Aleah and Jacinda from Northern Light Healthcare, her physical therapists at Spaulding Rehab, and the extraordinary team at Brigham & Womens Lung Transplant Center.

Per Bev’s wishes, there will be a Celebration of Life at the Wilson Memorial Chapel in Ocean Point (East Boothbay) in the summer.