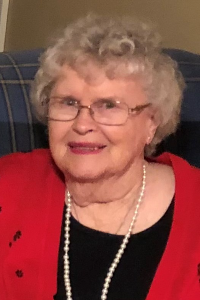 She leaves a son, Robert J. Lucier and his wife Maura of Shrewsbury; 2 daughters, Sally M. Stafford and her husband John of Leicester, and Betty A. Borkowski and her husband Todd of Cornelius, NC; 7 grandchildren, Joseph M. Stafford and his wife Chelsea, Rachel A. Stafford and her companion Stephen Smedberg, Nicole I. Lucier, Jennifer M. Lucier, Zachary J. Borkowski, Abigail G. Borkowski and Kate I Borkowski; a sister-in-law, Irene Egan of Sturbridge; and many nieces and nephews. She was preceded in death by her son Paul G. Lucier in 1996, by 4 brothers Joseph, Edward, Stanley and Alexander Zackiewicz, and by her sister Stasia Forand.

She was born at home on December 8, 1925 in the same house in Webster she has lived her whole life, the youngest of the 6 children of Julian and Josephine (Taraskiewicz) Zackiewicz. She graduated from Bartlett High School in 1944.

Mrs. Lucier first worked for Webster Shoe Company and then as a cafeteria worker in the Webster School System at Park Ave School for 15 years retiring in 1990.

She was a faith-filled communicant of Saint Joseph Basilica and a member of its Holy Rosary Sodality, Sacred Heart Society and Polish Women’s Club. She was also a member of the PAV Auxiliary and the Silver Dippers.

A special thank you to Carol Harvard, our cousin, for being her companion to appointments. Also, thank you to the staff at UMASS-University Campus Hospital for their special care of our mother.

Her funeral will be held Saturday, November 19, 2022, from Sitkowski, Malboeuf & Hickey Funeral Home, 340 School Street, Webster, with a Mass at 10:00 AM in Saint Joseph Basilica. Burial will be in Saint Joseph Garden of Peace. Calling hours will take place on Saturday from 8:30 to 9:30 AM in the funeral home, prior to the Mass. Donations in her memory may be made to Saint Joseph Elementary School., 47 Whitcomb Street, Webster, MA 01570.