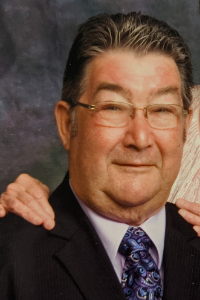 Larry Eugene Ritchie, 79, of Hillsdale, PA went to be with the Lord on Monday, November 14, 2022 from the Indiana Regional Medical Center in Indiana, PA.

The son of Fred Oakley and Helen Cora (Little) Ritchie, he was born on September 25, 1943 in Dayton, PA.

Larry was a proud graduate of the former Laura Lamar High School and an equally proud US veteran. Following graduation, he entered the US Navy and served during peacetime for over three years. Part of his US Navy tour was spent upon the USS Steinaker destroyer.

Larry was a man of great faith, who loved the Lord. He was a member of the Rochester Mills Presbyterian Church. In more recent years, he had been attending the Pine Grove Church of God near Cherry Tree, PA. Just one small example of his faith was that he always said grace before a meal. Whether dining at home or out in public, Larry would quietly bow his head and pray.

Larry had worked as a crane operator with UMWA Construction and spent many years employed as a coal handler with the Homer City Generating Station before taking his retirement.

In actuality, Larry never really retired. From the 1990’s until 2012 he worked part time at the former Hillsdale Monument Company. Especially during the holidays, Larry would assist with deliveries for the Flowers in Hillsdale floral shop. At Christmastime he donned a Santa hat when making deliveries and graciously accepted homemade cookies and treats as “tips.”

Since the late 1990’s Larry had been a much loved, valued and appreciated member of the Rairigh Funeral Home work family, where his warm personality, loyal dedication and mischievousness as the self-designated “Number One” staff member will be greatly missed.

A Homer City raised “boy at heart,” he also loved his adopted hometown of Hillsdale, where Larry could frequently be found sitting on his side porch waving to those passing by and enjoying visits with those who stopped to sit a spell and chat.

Very active in his community, Larry was a member of the UMWA; the IBEW; the Montgomery Twp. Rod and Gun Club and the Clymer American Legion Post #222, where he assisted with military funeral honors. He devoted approximately thirty years as an Assistant Boy Scout Master. He greatly enjoyed interacting with the scouts in his troop and serving as the “Voice of the Eagle” for numerous Eagle Scout ceremonies, including for his son, Rusty.

Some of Larry’s favorite pastimes were watching stock car races, hunting, deciphering Sudoku puzzles and enjoying good food and dining with family and friends at restaurants, fairs and local fundraisers.

Larry enjoyed conversing with family, friends and even folks he did not know yet. He touched many lives and was known for greeting his family and friends with a big smile and an even bigger hug.

One of the highlights of his life - Larry thoroughly loved spending time with
his family, especially his two granddaughters Avery and Lylah.

Surviving are his son, Russell E. Ritchie and wife Bekah of Indiana, PA, his two granddaughters: Avery and Lylah Ritchie of Indiana, PA; his sister, Louise Anderson of Jackson, TN; his sister-in-law, Connie Rae Adamson and special niece Deanna Adamson, both of Hillsdale, PA and his nieces and nephews.

In addition to his wife Lena, Larry was preceded in death by his father, who died in World War II; his mother; his son, Larry Ritchie, Jr and his sister, Ethel Turpin.

Family and friends will be received from 6-8:00 p.m. on Tuesday, November 15, 2022 at the Rairigh Funeral Home, Ltd in Hillsdale, PA. Visitation will continue at the funeral home on Wednesday, November 16, 2022 from 10:00 a.m. to the time of his 11:00 a.m. funeral service with family friend, Pastor Bob Sunseri, as the officiant. Interment will follow at the Montgomery Cemetery near Hillsdale, PA. Military honors will be observed by Larry’s friends from the Clymer American Legion Post.