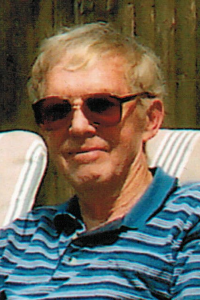 Leslie W. (Bill) Irwin, 94 of Londonderry passed away Saturday November 12, 2022, at Elliot Hospital in Manchester, NH, after a period of declining health. Bill was born in Hendersonville, NC to the late Gladys and Leslie Irwin. At age one, the family moved to Chicago, where Bill grew up. When he was ready to attend college, the family moved to MA where he attended Boston University and graduated with a Master’s degree.

With that in hand, he accepted positions at Helen King, Jr. High School, Portland (ME), Westbrook (ME) High School and Belmont (MA) High School as a teacher and coach of winning teams. Bill served in the US Navy during the Korean War. However, most of his career was spent at Framingham State College (now University) as the Assistant Dean of Continuing Education and Athletic Director. He put together the first ever Men’s Basketball team and coached it to two winning seasons. He remained Assistant Dean of C.E. for over 40 years.

Bill’s first wife passed away in her early thirties and left him with three small children. He worked tirelessly to keep the family together. Later he remarried and had twins, all the time making sure the family unit stayed strong. Years later he married Gerona, and they had 33 years together with lots of travel and family events. Family was everything to him.
Bill is survived by his loving wife, Gerona, his daughters, Jean Bombicino and husband James, Patricia Irwin, Christine Kelley and husband Charles, sons James and Thomas, brother Joseph and his wife Angela, and grandson Nicholas Bombicino. His grandson Anthony Bombicino predeceased him. He will be greatly missed by all his family.

After cremation, a memorial visitation will be held Saturday, November 19, 2022 from 2 - 4pm at the Peabody Funeral Homes and Crematorium, 290 Mammoth Road, Londonderry. In lieu of flowers, memorial donations may be made to the Londonderry Rail Trail at: Londonderry Trailways, P.O. Box 389, Londonderry, NH 03053.