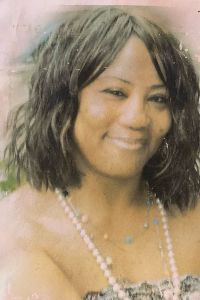 
If roses grow in heaven lord, please pick a bunch for me.
Place them in my sister’s arms and tell her they’re from me.
Tell her that I love and miss her and when she turns to smile.
Place a kiss upon her cheek and hold her for a while,
Because remembering her is easy, I do it every day.
But there is an ache within my heart that will never go away.
In loving memory of my sister Angela Denise Williams.

Angela Denise Williams was born on October 3, 1968, in Boston, MA, the daughter of the Late Willie James and Edna Williams, Angela was the 3rd oldest from this union. Angela always had a kindred spirit and loved to share that love among the people she met. Angela was loved by so many. A beloved Mother Daughter, Sister, Aunt and Grandmother. Proceeded in death her two Brothers Anthony J. Williams and Scotty Lewis.

Angela worked in the food industry service for most of her career. There was nothing short of Angela’s life that she did not enjoy. Angela welcomed everyone into her home with love. Angela also loves to dress to impress, especially putting on a hair show. Because she had some awesome wigs to change into whatever mood she was in. Sometimes Angela was the life of the party who enjoyed having a good time with family and friends, Angela spending time with her grandchildren, traveling, going to the casino as well as the carnival festival held each year when she had the chance. Angela loved to watch her favorite African movies on Youtube. She got a kick out of them.

Her beautiful life will forever be cherished in the lives of her Sons Rondale and Dennis Williams of Boston, MA along with her grandchildren Nyha Williams, Kyng Williams, Ashlyn Williams, Niva Williams and Teigan Greene. Sister Dollita and (Brother -in- Law) Mark Watson of Bridgewater, MA, Sister Latoya Lewis of Worcester, MA. Brother Jerry (Sister -n-Law Sharon Everett of Clinton, TN. Nieces: (Cherlita & Erica Williams of Quincy, MA, Kendra, and Jerrica Everett of TN along with their children. Nala Lewis and her children of Worcester, MA Sanai Lewis. Nephews: Jaceyon Lewis, Jovann Lewis, Karahn & TIA and their daughter Tivonna Green of CT, Karim Watson and children of Worcester, MA and Kiewann Watson along with his sons Kiewann Jr and Keyshawn Watson. Aunts and Uncles: Mary Jane & Donald (Pop) Finch of Milan, TN, Don Matlock of TN, Jack and Becky Matlock of TN, Fair Dean Williams of Roxbury, Pearlie Williams of Fitchburg, MA, and Wille Dell Jefferson of Fall River. And a host of cousins and friends.

At my sister’s request, she asked everyone who knew her to remember all the good memories and good times you shared with her and that she still is known as CHYNA and a Fabulous DIVA!!!!

The family would like to express our thanks, love and gratitude.

All are welcome to a gathering of family and friends on Saturday, November 19, 2022 from 12-2PM at the Casper Funeral Home located at 187 Dorchester Street Boston, MA 02127. Interment services will be private.