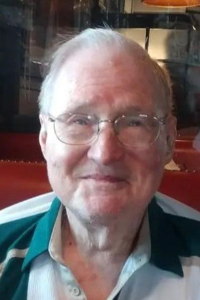 Kenneth C. Henderson, 94, passed away peacefully on November 12, 2022 in Holy Trinity Nursing and Rehabilitation Center, one week shy of his ninety fifth birthday. He leaves a son Joseph and his partner Joseph Mara of Northborough; a daughter Jean Blomquist and her husband Peter of Holden; 2 grandchildren Jaime Kach and her partner David Paul of Worcester and Jodie Duval and her husband Eric of Holden; 4 great-grandchildren Jace and Lacy Duval, Jack and James Kach; and several nieces and nephews. He was predeceased by his wife Elaine W. (Lind) Henderson and by brothers Robert and Harold “Mike” Henderson.

Kenneth was born in Worcester, son of the late Henry and Hazel (Hildreth) Henderson. He attended the former Worcester Boy’s Trade School and graduated from Commerce High School. Ken proudly served his country with the US Navy in WWII and Korea, as well as his community, serving as a firefighter with the Worcester Fire Department for 38 years, retiring in 1992 as a District Chief. He was a member of Zion Lutheran Church, the Morningstar Lodge AF and AM, the Worcester Retired Police and Firefighters Association and the Retired Men’s Club of Greendale.

Ken enjoyed golfing, his bowling league and as a season ticket holder he was a faithful follower of the Holy Cross Girls’ Basketball team. But his favorite teams where he received the most enjoyment were the ones on which his great-grandchildren played. He attended every game possible and was their greatest supporter and number one fan. He treasured any time spent with his family and friends. Kenneth was a humble man who lived to quietly serve others. His love and commitment to his family were hallmarks of his life. In keeping with his strong character, he valued and honored the brotherhood of the WFD, which remained an important focal point during his later years. His ready smile, quick wit, sense of humor and eagerness to help brought great light to his family and friends. Whether one called him Kenneth, Kenny, Ken, “Red”, “Chief” or Grap, he will be dearly missed by all who knew and loved him.

At Ken's request, all services will be private. Nordgren Memorial Chapel 300 Lincoln St. Worcester is assisting the family with arrangements. Donations in Ken's memory may be made to Box 4 Special Services at; Worcester Fire Department Credit Union, ATTN: Box 4 Special Services, 34 Glennie Street Worcester, MA 01605 or online at www.worcesterbox4.org . The family would like to thank the staff at Holy Trinity Nursing and Rehabilitation Center for their exceptional care, compassion and devotion. To leave an online condolence message, please click guestbook link.