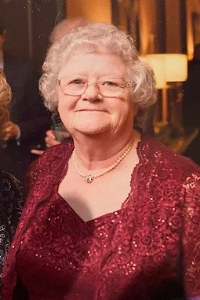 TEWKSBURY: Mary Margaret (Fowler) Iandoli, age 81, a resident of Tewksbury for the past seven years,
formerly of Somerville, passed away at the High Pointe Hospice House in Haverhill on Thursday, November 10, 2022.

She was the beloved wife of Joseph A. Iandoli, who passed away on February 23, 2015.

Born in Boston on November 18, 1940, she was the daughter of the late Peter Fowler and the late Mary P. (Batten) Fowler.

Mary was raised in Somerville and graduated from Somerville High School.

Following her wedding, Mary devoted herself to her husband and raising their four children.

She was known to attend every baseball game, hockey game, and social event that her children participated in. In addition, she provided them with guidance towards their academic success.

Following the passing of her husband in 2015, Mary’s life was her four children, eleven grandchildren, and her great grandson, who she loved dearly.

She is survived by her four children, Robert J. Iandoli and his wife Sheryl, of Mansfield, Janet M. Josselyn and her husband Edward, of Billerica, Karen L. Carignan and her husband Paul, of Saco, ME, and Richard P. Iandoli and his wife Amy, of Tewksbury: eleven grandchildren, Jonathan E. Josselyn and his wife Jacqueline, Alyssa L. Carignan, Erica A. Josselyn, Amanda R. Iandoli, Andrew J. Carignan and his wife Mariah, Sarah N. Iandoli, Nicholas J. Josselyn, Abbey L. Carignan, Matthew J. Iandoli, Brianna D. Iandoli, and Vanessa A. Iandoli: her great grandson, Trevor M. Josselyn. Mary was the sister of Rita Beaton and her late husband Kenneth, of Saugus, and her late brother, Hubert Fowler and his surviving wife Marjorie, of Somerville. She leaves many nieces, nephews and extended family members.

Calling hours are Wednesday, November 16th, from 4-8 p.m. at the Farmer & Dee Funeral Home, 16 Lee Street, Tewksbury. Funeral services will be held Thursday, November 17th, at 10:30 a.m. at the funeral home. Interment to follow at Woodlawn Cemetery, Everett. In lieu of flowers, donations in her memory may be made to the American Heart Association, www.heart.org, 300 5th Avenue, Waltham, MA 02451.