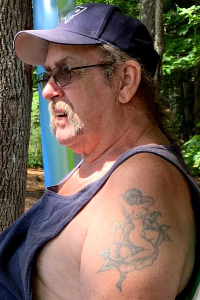 He was born in New London, New Hampshire on April 14, 1952, to the late Robert Gray Welch and Joyce Margret Hendy Welch (Thorington).

After high school he joined the United States Navy. He proudly served in the Vietnam War on the USS Saratoga and was enlisted as a Fireman Apprentice during his service and achieved the rank of Seaman Apprentice. During his service he earned the National Defense Medal, Vietnam Service Medal, a Navy Unit Commendation Ribbon, and
a Vietnam Campaign Medal.

He worked several jobs after returning home and owned his own construction business in the early 90s as well as a landscaping business in the early 2000s. He retired in 2008 due to some medical issues, but he didn’t let a weak heart slow him down. Once recovered he enjoyed relaxing at home and pranking his wife and grandchildren. He also enjoyed going on 4WD trail adventures and boating and was a passionate Patriots fan. Jim was a kind and generous soul that will be missed by many.

Jim was predeceased by his sister Winnie.

Burial services will be held at the Springvale Veterans Cemetery in the spring of 2023.

Online condolences can be submitted at www.mainefuneral.com


Arrangements have been entrusted to Chad E. Poitras Cremation and Funeral Service, Buxton, www.mainefuneral.com
- Celebrating the Lives of Veterans -