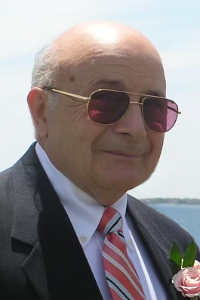 Pantaleone “Leo” W. Grande of New Bedford died peacefully on Tuesday, November 8th at the remarkable age of 93. Born September 7th, 1929 in Montauro, Calabria, Italy, he immigrated to the United States in 1930 with his father, Pantaleone Grande, his mother Caterina (née Ranieri) and his late older brothers Antonio and Rocco, settling in Boston’s North End. On September 6th, 1954, he married his soulmate, Lucia “Lucy” Pasquale. Together they had three children: Debby Evans of Owego, NY, Len Grande of Chapel Hill, NC, and Greg Grande of Attleboro, MA. They settled in New Bedford in the early 60s and made it their home as Leo thrived in his career as a clothing designer for Calvin Clothing in New Bedford, working his way to Vice President of Design. After retirement, Leo became a prolific quilter, and blessed his family with dozens of beautifully handcrafted works. He was also a lifelong fan of golf. A communicant of St. Francis of Assisi Church in New Bedford, he was a member of the Men’s League and his love of music led him to sing with the choir for many, many years, as Lucia directed and played the organ. He was predeceased by Lucia in 2016 after 62 years of marriage. Leo and Lucy always had room at their table and shared their love and generosity with all who met them. In addition to his children, he leaves behind son-in-law Bill Evans, and daughters-in-law Laura Grande, Denise Pelletier and Josie Grande, and 6 grandchildren; Rory Martell and his wife Beth Coolidge, Alex Grande and his wife Jenny, Chris Grande and his wife Katie, Colin Evans and his wife Jessica, Keegan Evans and his fiancée Nicole Bergmann, and Nick Grande, as well as several nieces and nephews, and brother-in-law Genaro Pasquale. His family is very thankful that he was also able to meet his two great-grandchildren; Aurora Mae Lucia Evans and Massimo Leo Grande. Leo was loved by all who knew him, and especially by his family, who takes great pride in continuing his beautiful legacy.
His funeral will be held on Saturday, November 19th at 9am from the Saunders-Dwyer Home for Funerals, 495 Park St., New Bedford, followed by his Funeral Mass at St. Francis of Assisi at 10am. Following the mass, Leo will join Lucy at St. Mary’s Cemetery. Visiting hours will be on Friday, November 18th from 2-5 pm.
SUNDAY STANDARD-TIMES, NEW BEDFORD, MASS.,
FEBRUARY 12, 1978

Clothes designer has no pattern job


“The best part of my job is the challenge,” says Leo W. Grande, top designer with Calvin Clothing Corporation in New Bedford.

The 48-year-old Grande has been employed by Calvin Clothing for 16 years.

“I came in as a general foreman and at that time we were located at Sawyer Street,” says the New Bedford designer of men’s and boy’s clothes.

“I subsequently went into designing and production and then became vice-president,” of that department.

He says as a designer, “It’s just not making the pattern itself.”

His job involves more than that. “Initially,” he says, “the entire plant was under my jurisdiction but I wanted to relinquish control over production so as to devote more time to designing, quality control, and research and development.”

Overall, “quality is one of my responsibilities,” says Grande, “who relaxes and puffs on a pipe during the interview.

Grande does not attribute his ideas for styles simply to reading garment periodicals like “Men’s Stylist” or “Gentleman’s Daily,” he says; he observes people.

“Say you’re out socially and an individual complains about his suit being too tight. When you try to create something, you keep that person in mind,” says Grande.

You come up with a style “which will keep men feel more comfortable…the greatest expression of this was the leisure suit.”

When he creates garments for boys, the prototype is the men’s suit. “Why should he be cheated out of a styling his father has?”

“I don’t necessarily want my child to dress like me, but I want him to have the choice if he wants to—make it more available to him.”

For boys, Calvin Clothing designs appear under the labels: Pierre Cardin for boys, John Weitz for boys, Buddy, and Calvin/Palm Beach for boys.

For Men, labels are “Calvin for Men” and “Joe Namath” clothes.

“Calvin Clothing is into the tailored, classic look and presently, we’re going into the soft expression look—the look is not as rigid and will feature narrower collars and lapels,” says Grande.

The designer has “an innate feeling that certain fabrics will go with certain styles,” explaining that a pinstripe belongs in a suit line or a bold plaid in a sport coat line.

One of Grande’s favorites is natural wool. “In my opinion, it is the best fabric to work with because of its reliability.”

But he said every piece of goods is tested for wearability and fusibilty of the fabric anyway. And he adds, “we don’t go into very open weave fabrics.”

From the main office at 64 Conduit Street, Calvin Clothing ships garments directly to retailers. There are regional offices in New York City, Texas, and California but the entire manufacturing process—from cutting the cloth to sewing buttons—is done in New Bedford by Calvin Clothing’s 780 employees says Grande.

Grande began his trade at the age of 9. “I had just lost my father. My mother decided to put me in a custom-tailor shop after school,” he said. Grande believed she made that decision to keep him off the streets and also to learn a trade.

He remained with the tailor until he finished high school at which time he was awarded an academic scholarship which he was allowed to use at a design school—Men’s Fashions in Boston—for two years.

While at school, he worked as a cutter and fitter for a custom tailor, Spugnardi’s in Boston. He said it was at that time he foresaw the decline of the custom finishing business and the rapid growth of the retail garment business.

Before Calvin, he worked at Kingston Clothing Company in Boston.

Grande says he takes “tremendous pride” when a new style is being manufactured. “I wait anxiously to see the finished product. I follow it through from the cutting process, stitching—the entire manufacturing process.”

He says for the past few years, “I’ve gone into the more casual feel of clothing, whereas before, I was into the classic European look.”

He says styles are not solely determined by him. “I cannot say to a consumer, ‘ You are going to wear this.’ You can’t shove it down their throats.”

At the plant, a design is derived “both from merchandising and designing departments.”

“Though the designer has the idea and feel for a style…merchandising has the feel for what the consumer really wants.”

“After that, the concept (of the style) is interpreted by me onto paper (the master pattern).”

Does he wear his own designs?

“Oh! I certainly do,” he says emphatically, saying that the Harris tweed coat he wore to the plant that day was his own design.

He said years ago when he had more time, he made Easter outfits for himself and his wife, Lucy. And when his children—Deborah, 22; Leonard, 20; and Gregory, 14–were growing up, they “were the best dressed youngsters on the block.”

Grande says he puts in “at least a nine-hour day” and often he works Saturday mornings. He said that when they’re introducing a new style and there are pressing deadlines at the plant, his day could be even longer.

Grande says he’s so wrapped up in his work that his wife has to constantly remind him not to “talk shop” when out socially.

There is at Calvin Clothing at least one improvement in the manufacturing process that Grande is partly responsible for—the computerized pattern marker.

Before the computer was put into the plant, Grande first evaluated the machine by visiting other plants that had it.

Part of Grande’s duties is to research new machinery and he has traveled to European clothing plants to study the mechanization there.