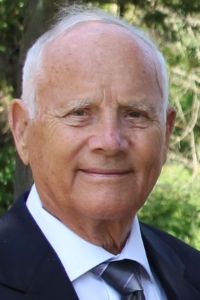 Richard T. Russell, of Canton passed away on November 7, 2022 with his loving family by his side. He was 96 years old.
Born and raised in Stoughton, he graduated Valedictorian from Norfolk County Agricultural School. Dick worked at the Mass Hospital School in Canton for 35 years. He began his career at the Mass Hospital School in Animal Husbandry. When the program ended, he briefly worked in maintenance and grounds before settling in at “The Carpenter Shop”. He was deeply respected and loved at work where he willingly went anywhere and everywhere to fix what needed to be fixed. One of his projects that he enjoyed crafting was a fish tank in the school lobby for all to enjoy. A tireless worker, he spent evenings and weekends working for friends and neighbors doing a variety of jobs ranging from interior and exterior carpentry, painting and yard work in both Canton and Dennisport. In the winter, he was always checking the weather for incoming storms, so he could prepare to clear the snow from dozens of driveways with his Farmall tractor and plow. He worked well into his early 80’s.
Dick and the love of his life, Eileen married in April of 1951.They were married for 71 years. In the mid 1950’s he devotedly built their home in Canton where they raised their three daughters. In the 60’s he bought and skillfully renovated a small cottage in Dennisport for his family to enjoy. Dick was a dedicated father; he was present in all aspects of his daughters’ lives. He especially enjoyed supervising or lending a hand at each of their many residences over the years. Dick thoroughly enjoyed being a grandfather and great grandfather always being there for birthdays, recitals and ballgames. Dick was a true friend to all. He enjoyed sharing jokes and stories, playing cards, tinkering in his woodshop, gardening and fishing. He loved to travel. He especially loved cruising with friends and later in life with family. He found pleasure in all things Cape Cod particularly relaxing at the cottage in Dennisport with his family and his many friends. Dick served as a Cooperator for the Bank of Canton for many years. He was a Navy Veteran of WW II and a member of the DAV in Randolph. He and his wife were members of the 20/40 Club in Stoughton. Dick was a kind and caring man. He will truly be missed.

Cherished husband of the late Eileen E. (Perry). Beloved father of Susan Cogliano and her husband Eddie of Canton, Cynthia Flanders and her husband Ed Shorey of Bourne, and Sharon LeBlanc and her husband Michael of Sharon. Adored grandfather “Bumpa” of 6 grandchildren and 4 great grandchildren, Richard and wife Julie Cogliano and their children Hailey and Ryan, Andrew and wife Courtney Cogliano and their children Logan and Lilly, Maxwell and Olivia LeBlanc. His cherished granddaughters Jennifer and Emily Flanders predeceased him. Son of the late Charles and Gertrude (Capen) Russell of Stoughton. Brother of the late Bradford Russell, Charles Russell Jr., and Marjorie Haase. Visiting hours at the Dockray & Thomas Funeral Home 455 Washington St. Canton Tuesday from 4:00 to 7:00 pm. Funeral service at the Trinity Episcopal Church, 1 Blue Hill River Rd Canton Wednesday morning at 10:30. Burial Knollwood Memorial Park, Canton. In lieu of flowers, donations may be made in his memory to the Cystic Fibrosis Foundation 220 N Main St # 104, Natick, MA 01760