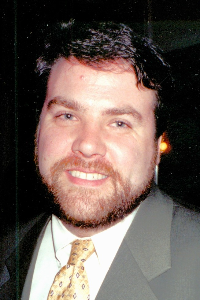 Michael E. Reny, 55, of Derry, NH passed away Thursday November 10, 2022 at home surrounded by his loving family. He was born November 15, 1966 in Colorado Springs, CO, a son of retired Lieutenant Colonel Donald E. Reny and the late Patricia Ford. Michael was a resident of Derry for the past 25 years, and grew up in Newbury, NH. Michael graduated Keene State College in 1988. He was a proud member of the Phi Mu Delta fraternity during his time in college and as an alumni.

Michael was employed as a Biomedical Equipment technician for over 30 years and was most recently self-employed in his own home repair business as “Handi Mike.” His hobbies included tinkering with everything from recycled treasures, motorcycles, and cars, reading newspapers and journals, watching old documentaries on aviation and World War II, and loved fine crafted beers, tequilas, and Swisher Sweet cigars. He treasured his many pets, including his devoted cat, Sabrina.

He is survived by his wife of 31 years, Kimberly (Power) Reny of Derry; three daughters, Katelyn Dulong and her husband Matthew of Manchester, NH, Sarah Reny of Londonderry, NH, and Emily Reny of Derry; his father, Donald Reny and his wife Barbara of Williamsburg, VA; his half-sister, Cara Resnick of Buffalo, NY; his stepfather Robert Gibbons; as well as several aunts, uncles, and cousins.

Calling hours will be held on Wednesday, November 16th from 4 - 6:30pm in the Peabody Funeral Homes and Crematorium, 290 Mammoth Rd., Londonderry. A funeral service will follow at 6:30pm in the funeral home. Following cremation, his ashes will be buried in North Conway, NH in the Spring of 2023. In lieu of flowers, memorial contributions can be made to the ASPCA.