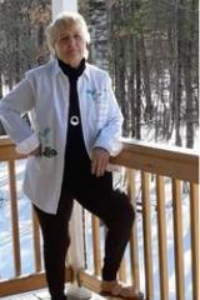 WATERBORO- Geneva “Ginny” Quatrano, 79, passed away peacefully and comfortably on November 8th, 2022 at Gosnell Memorial Hospice House in Scarborough, Me. She was born in Portland, Maine on July 10, 1943, to Phillip Quatrano and Florence Aubin. She attended Cathedral High School, and then graduated from Portland High School. After high school she married and built a family in Gorham, where she was known as “Ma Blais”, by not only her own children, but the neighborhood children as well. She also ran a licensed foster home for several years serving many children and families in Maine, eventually adopting her youngest daughter, adding to her already large family of girls. She worked hard and loved spending time with her family, and teaching her daughters and grandchildren true, loyal values. Ginny enjoyed, BINGO!, lottery, “wining”, the outdoors, fishing, cooking, camping and camp fires, and she had a very special love for hummingbirds. She is predeceased by both parents, her sister Anna Eaton of Naples, her Brothers Phillip and Frankie, her dear friend Janet Davis, and her son in law Allan Dame. Ginny is survived by her sister Francis of Portland, and her Daughters; Lisa Derocher Bouchard and her husband Dale of Clinton, Debbie Ebert of Sebago, and her children, Chipper, Jonathan, Eryn And Caitlan and one grandchild Ezra, Dianne Smith of Albion, and her Children Travis, Alicia and Jesse and five grandchildren Dyllian, Wyatt, Darren, Julian and Penelope, Darlene Dame of Lebanon, her children, Renee and Robyn and her grandchildren Devon, Cameron, Triston, Haley, Madison and Paisley, Donita Talbot and her husband Dennis of Standish, and their daughter Miryah, Dawn Barrett and her husband Rodney of Porter, her children Derek, April, Amber, Audrey and Angel, and her grandchildren Noah, Forest and Jensyn and Bernadette Blais of Limington, and her two daughters Jaci and Jordyn. She also leaves behind several nieces and nephews that were very special to her.
A celebration of life will be held on November 19th at the Greenleaf Masonic Lodge in Cornish from 12-4 pm. Her family will provide a potluck meal for all to enjoy.
Online condolence messages can be submitted at the Poitras, Neal & York Funeral Home website, www.mainefuneral.com
Per Ginny’s request, PLEASE DO NOT SEND FLOWERS OR BRING THEM TO HER CELEBRATION. Instead, you can donate to the Children’s Arthritis Foundation or the American Breast Cancer Foundation in her memory.