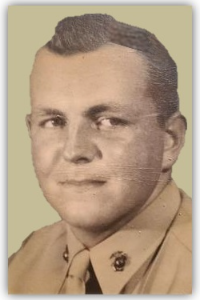 Wallace F. Gibbs Jr. of Canton passed away November 6th. Born and raised in Dorchester, he graduated from Boston English High School. Wally worked as an Installation and Repair Technician and became a Manager for New England Telephone for many years before retiring. He lived in Canton since 1955 and was an active member of the Canton Community. He was a longtime member and past President of the Canton Historical Society, a member of the Blue Hills Civic Assn where he and his wife Marie were named the Dr. Elkort Citizens of the year in 2009. He was also a longtime member of the Canton Lions Club and active with the Friends of the Little Red House (Tilden House circa 1725) at Pequiteside Farm and worked the Town of Canton Election Polls for many years. Wally was an avid reader and life-long learner. His passion was history and knew specific battles from the conception of the U.S. until modern time. He was a United States Marine serving during the time of the Korean conflict in the Pacific; specifically, in submarines in the Aleutian Islands. Wally always enjoyed a good game of cards; cribbage was a favorite that he continued to play until his passing. He also loved going to Ponkapoag Golf Course especially when he could beat family and friends. His real passion, besides family, was the family home featured in Early American Life where he and Marie could live out their dreams of the 18th century. A reproduction salt-box style that he had built and furnished with his handmade furnishings and their artisan crafts. It stands as a testimony to their love and their love of history and antiques.
Beloved husband of Marie C. (Lamb) for 67 years until she passed unexpectantly this September 18th. Father of Susan Rice and her husband Paul of Bennington, Vermont; Christopher Gibbs and his wife Laura of Canton, Amy Boretti of FL. He was predeceased by his beloved eldest son, Joseph Mark Gibbs and his wife Susan Pineo Gibbs, both of Canton. Brother of Lloyd Gibbs of Foxboro and the late Joan D’Hedouville. Wally is survived by 10 grandchildren and numerous great-grandchildren, as well as beloved nieces and nephews. Funeral Mass at St. James Church, Stoughton Thursday, November 17th at 10:30am. Visiting hour at the Dockray & Thomas Funeral Home 455 Washington St. Canton Thursday, November 17th prior to the Mass from 8:45 – 9:45 am. Burial at Highland Cemetery, Norwood.