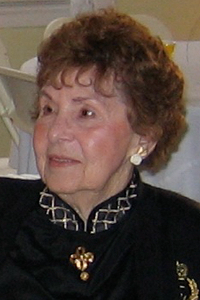 Josephine S. "Joan" Anderson, 100, of Rochester died peaceably on October 30, 2022. She was born in Lowell, daughter of the late Stanislaw and Antonina (Radziwilowicz) Pomarnacki.

Joan’s life was shaped by multiple challenges- growing up during the depression, coming of age during World War II, and soon thereafter, becoming a single mother raising two small children. Soon after graduating high school as valedictorian, she courageously left her sheltered life on a small farm In Billerica MA and traveled to Washington DC to work for the Navy in support of the war effort, eventually meeting and marrying Earl Anderson, a Lieutenant in the Marines.

After her divorce, she had an extensive career in the Civil Service. Striving to support herself and her two young sons, she moved around the country when better job opportunities arose, building a career that culminated as a public relations specialist for the US Army Corps of Engineers, from which she retired.

She was noted for her tenacity, attention to detail, and willingness to work and fight for what she needed and believed in. She wanted the best for herself and those she loved, and dedicated her life to that simple pursuit. She gave generously to a host of charities for Native Americans and the handicapped, as well as her church. She loved watching Dancing with the Stars, The Bachelor, the Patriots, and countless cooking shows, and cheered for Tiger Woods even after his transgressions. She loved dancing herself, having been a ballroom dancer in her youth, and even had “dancinlady” as her email address. But first and foremost, she was a devout Christian Scientist, to which she attributed her exceptional health and longevity and which gave her a positive approach to life that was evident in all of her actions and interactions. As one relative commented recently. “Without doubt, Joan is now embraced by divine love.”

Joan was a caring mother, grandmother, great grandmother, sister, aunt, and friend and will be missed by many. She is survived by her son Donald (Don) Anderson and wife Kathleen (Kay) Hudock, and daughter in-laws Andi Amdahl and Sherry Roodhouse Black. She has five grandchildren who loved her dearly: Brian Anderson, and wife Abigail Anderson, Eric Anderson and his wife Jessica Geisinger, Lauren Anderson, Erin Anderson and his wife Tyler Jo, and Sarah Rose and her husband Tim Rose. Joan adored her six great grandchildren, Henry Anderson, Emma Anderson, Griffin Anderson, Drake Woodell, Devon Woodell, and Audrey Criscuola. She had several nieces and nephews. She is pre-deceased by her son Cloud Anderson and is sister of the late Edward Pomarnacki, Mikel Brown, Ann Bishop and Janice Souza.

Her private arrangements are with the Saunders-Dwyer Mattapoisett Home for Funerals, 50 County Rd., Mattapoisett.