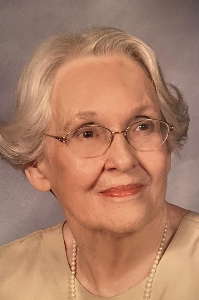 Judith was born to Verne and Ida (Hachet) Buchanan in Auburn, IN on October 22, 1923. She graduated from Auburn High School in 1941 and Northwestern University in 1945. She married George V. McMahan in 1945, and they moved to Anderson following the war in 1946. Her husband George died in 1955, and she later married Dr. Charles Austin. He died in 1995.

Judith was active in many organizations. She was a member of Pi Beta Phi, national college sorority, active in Girl Scouts and Boy Scouts for 12 years, member of AAUW, Tri Kappa, Beaux Arts, Edgerle Reading Club, and Current Events Club. She was a charter member and served on the board of directors of the League of Women Voters and was on the board of directors and a life member of Pink Ladies of Community Hospital. She was also a member of the Center for the Arts, Trinity Church and the Anderson Library Great Books Group.

A memorial service will be held on Saturday, November 12, 2022, at 12 Noon at Rozelle-Johnson Funeral Service. Visitation will be held two hours prior to the service at the funeral home.

In lieu of flowers, memorial contributions may be given to Alternatives Inc., P.O. Box 1302, Anderson, IN 46015