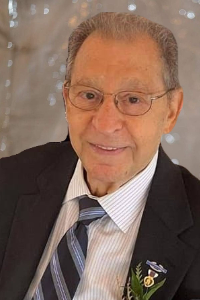 Frank G. Fredella passed away peacefully at the Lahey Clinic Medical Center of Burlington on Wednesday, November 2nd. He was 92. Raised in East Boston and Medford, Frank was the son of the late Lorenzo and Jennie (Vella) Fredella. After high school he served in the United States Army in the Korean War, earning among other decorations the Combat Infantry Badge and the Purple Heart.

Upon his return from military service, Frank worked in the clothing business and married the love of his life, “Jo”, eventually settling in Woburn where they have made their home for 52 years. Frank worked with clothing manufacturers such as Piccariello and Singer before he and his family began their own enterprise. The company which eventually became Sterlingwear of Boston, located in East Boston, produced quality garments for many retailers and earned particular fame for producing the iconic US Navy peacoat for over 60 years. The firm actually produced uniforms for every branch of the service, at one time or another. A man with an unmatched work ethic, Frank was devoted to the company’s employees and always made sure that their working conditions were safe and pleasant. Devoted to veteran’s causes, Frank was honored as the Grand Marshall in the East Boston Veteran’s Day Parade. Well into his 80’s, he also marched for several years the full length of the St. Patrick Day Parade in South Boston. Recently, he participated in an honor flight to Washington, D.C. to visit the national war memorials. Unlike many of his generation, Frank kept up with technological advances and was an early multi-tasker as computerization came into the work place.

Although his work commitments were important to him, his love for his family was his first consideration. He was devoted to his wife, children, and grandchildren. He and Jo enjoyed going out dancing and enjoying the popular music of their younger years. Frank even enjoyed a dance or two at his grandson’s wedding this past summer. Frank loved time with his family and friends and will be sadly missed by those who knew him.

The beloved husband of Josephine E. “Jo” (Russo) Fredella, he was a devoted father of Larry Fredella and Gina Tenaglia and her husband Frank. Frank was a loving grandfather to Stefan Tenaglia, Gianna Tenaglia and her fiancé Rob Capaldo and Zachary Tenaglia and his wife Nicolette Moriconi. He was a loving great-grandfather to Genevieve and Vienna. The dear brother of Phyllis Cain and her husband George, Josephine Gagnon and her husband Donald, the late Anthony Fredella, his surviving wife Jane Denahey and Eleanor Alcorn and he was also the dear brother–in-law of Philip Russo and his late wife Joan. He is also survived by many dear nieces and nephews.

A funeral service will be conducted in the Dello Russo Funeral Home, 306 Main St., Medford Wednesday, November 9 at 11 AM. Relatives and friends are respectfully invited to attend and may visit with the family on Tuesday 4 - 8 PM.

In lieu of flowers, contributions may be made in Frank’s name to Honor Flight New England, PO Box 16287, Hooksett, NH 03106 or to www.Honorflightnewengland.org.