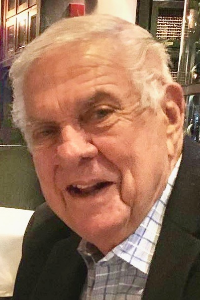 Wilkins, Richard “Dick” formerly of Burlington, MA and more recently of Sherborn, MA passed peacefully surrounded by his family on October 29, 2022. Dick was beloved by all who met him. He was born to Harold and Lillian Wilkins on May 22, 1933, and grew up in Belmont, MA. He was the eldest of 3 sons. Dick graduated from Belmont High School Class of 1951 where he was a standout football player. He then enlisted in the U.S Navy, serving on the aircraft carrier USS Bennington during the Korean War. Shortly after his honorable discharge, he married Vita Federico. Soon thereafter they moved to Burlington where they raised a son and daughter and lived for over 30 years. Dick was active in his community which included volunteering his time coaching hockey and baseball. Dick began his career as a draftsman and over the years migrated to operations and production management positions in the apparel industry and technology sectors.

He was the devoted father of Lauren Wilkins Miner and her husband Tim of Sherborn, MA and Scott Wilkins and his wife Janine of Norfolk, MA. Dick spent his retired years living in Sherborn as a proud grandfather of Amanda, Christopher, Brandon, Cameron, and Caroline. He was a familiar face and constant spectator at their many activities and sporting events and his attendance record at games and events was legendary. Dick was also an avid sports fan and experienced great joy coaching his grandsons as an assistant on the Dover Sherborn HS football team. He is also survived by his brother Roy Wilkins of Gloucester, MA and late brother Robert Wilkins formerly of Belmont.

Visiting hours will be held at the George F. Doherty & Sons Funeral Home 477 Washington St. Wellesley on Sunday, November 6th from 4-7pm. A funeral service will be held at the Pilgrim Church, 25 S. Main St. Sherborn on Monday, November 7th at 11am. Interment private at the Massachusetts National Cemetery. In lieu of flowers, please consider a donation in Dick's memory to the National Kidney Foundation or to a Veteran's charity of your choice.