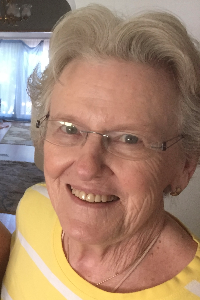 Mildred Margaret Zimmerman, Powell, Childers, age 90, entered into rest on October 29, 2022 at her home in Prosser. She was born on July 18, 1932 in Sunnyside, Washington to William Henry and Emma Sophia (Carlson) Madison. She was lifetime resident of Prosser and graduated from Prosser High School with the Class of 1951.
Over the years, Millie worked at Rodman’s Shoes, the Benton County Treasurer’s Office and the Benton County Clerk’s Office. She retired in 1982. She was an avid Seattle Seahawks Football fan. She was a member of the First Baptist Church in Prosser and also the American Baptist Women.
Millie and Ruebin Zimmermann were married on July 15, 1951 and they raised one son, Jonathan. After his death in 2002, she married Glenn Powell on July 17, 2005. Glenn passed away on October 22, 2010. She later married Howard Jay Childers, who passed away on February 5, 2015. She was a caring and nurturing wife.
Millie is survived by her sister, Charlotte Butler of Prosser; son, Jonathan Zimmermann & wife, Barbara of Richland; grandson, Max Zimmermann of Waitsburg, WA; granddaughter, Madison Wyatt and husband, Ryan of Kennewick; numerous nieces and nephews, the Childers family; and close personal friend, Tina Smith of Prosser.
She was preceded in death by her parents; siblings, William, Jack, George, Joanna, Louise, Stanley, Edward, Donald, Joe and Harold; her husbands, Ruebin Zimmermann, Glenn Powell and Jay Childers; and numerous nieces and nephews.
The family would like to thank Heartlinks Hospice, All Ways Caring, Prosser Memorial Hospital, the EMT staff and everyone that touched her life.
A Celebration of Millie’s Life will be held at a later date. Memorial contributions may be made to Mustangs for Mustangs, Prosser, WA