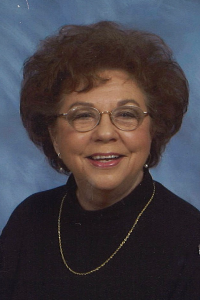 Graveside services will be held 11 AM, Friday, November 4, 2022, at Patterson Cemetery, in Patterson, Georgia, with the Rev. Robert Couey and the Rev. Billy Stephens officiating. The family will receive friends Thursday evening, from 6PM until 8 PM, at the funeral home in Ocilla.

Mrs. Thomas was born December 20, 1931, in Wayne County, Georgia, to the late James Allen Harris & Emmaline Godwin Harris. She was an honor graduate of Patterson High School, holding the title of “Miss Patterson High School” and also “Miss Pierce County Farm Bureau.” She also played on the varsity basketball team for four years. Later Mrs. Thomas attended Ben-Hill Irwin Technical College, studying accounting. Mrs. Thomas was an insurance agent for Rogers and McCranie Insurers for 33 years until retirement. Mrs. Thomas was a member of the Ocilla Pilot Club for several years, serving as Corresponding Secretary and was a director of the Ocilla Chamber of Commerce for several years. Mrs. Thomas was honored in 2005 as “Director of the Year.” She also served and worked with the American Cancer Society and Blue-Gray Community Hospice. She was a member of the Ocilla Baptist Church and the Gleaners Sunday School Class. She was very active in the WMU and sang in the choir for 30 years.

She was married to her high school sweetheart, the love of her life, and together they raised two daughters, Tamara and Donna. Mrs. Thomas was an accomplished, self-taught artist. She started painting and drawing at a very young age and painted well into her 90’s. She donated many paintings to various charities for auctions. She was very generous with her creations, giving away more than she sold. She lived a very active life and lived in her home on the family farm alone for 23 years, after her husband passed away. After she turned 90, she moved to Cypress Pond Senior Care, and resided for the last seven months. Mrs. Thomas dearly loved the Lord, her family, friends, animals and all of nature.

The family suggests those desiring to send memorials, may send them to the Ocilla Baptist Church, P.O. Box 101, Ocilla, Georgia, 31774.