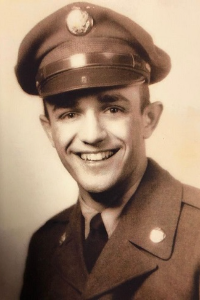 Thomas L. Nawn, 89, a resident of Tewksbury, Massachusetts for the past 60 years, died on October 30, 2022, after a long illness. Thomas was the beloved husband of Mary A. (Abban) Nawn, with whom he enjoyed 54 years of marriage before her passing in 2010.

Thomas was born in Boston on May 13, 1933 and was the son of the late Theodore L. Nawn and Alice G. Nawn. He grew up in South Boston and attended Boston Public Schools, graduating from South Boston High School in 1950. He was consecrated and served as Anagnost in the Albanian Orthodox Church at Holy Trinity Church in Boston.

Thomas served during the Korean Conflict in the U.S. Army with the 101st Airborne. After his military service, he met and married Mary in 1956 and raised eight children. Thomas worked his way through college earning a B.S. in Education from Boston State College in 1961. He also attended Mount Mercy College in Pennsylvania, and went on to graduate from Northeastern University in 1970 with a master’s degree in Education. The family moved from South Boston to Tewksbury in 1962. Thomas worked in Littleton, MA for seventeen years as a teacher and then a principal at the Shaker Lane School.
Thomas also worked within the Tewksbury Public School system as an assistant principal, kindergarten coordinator, and an administrative assistant to the superintendent's office. He also served three terms on the Tewksbury School Committee from 1966 through 1975, serving twice as chairman. Thomas retired in 1990.

Thomas and Mary enjoyed their retirement traveling with family and friends and cruising on their boat, the "Anawnymous". He had been an avid gardener. Thomas enjoyed spending time with his family and friends, especially with his grandchildren and great-grandchildren. He was a lifelong member of the Tewksbury Elks and a former member of the South Boston Yacht Club, where he learned to sail as a child.