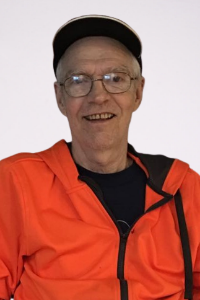 Vinnie was born in Boston, MA on July 29, 1945. Shortly after graduating high school, he served honorably as an E-3 Seaman in the U.S. Coast Guard at the Coast Guard Station Boston from August 1965 to October 1969 and was awarded the National Defense Service Medal. He then worked for many years as an oiler with his brother Carl at many construction sites in the Boston area as a member of the Local 4 Operating Engineers Union.

He was an avid practitioner of Transcendental Meditation and had a deep interest in Buddhist philosophy and teachings. He founded and ran for many years a non-profit spiritual retreat organization. Vinnie was also an active and grateful member of AA which he credited with saving his life, and he was very proud of his more than 40 years of sobriety. He was a kind and generous soul, with a keen sense of humor who supported causes near and dear to his heart such as animal welfare, the environment, and the homeless.

Most of all Vinnie loved animals and his house was always filled with a succession of cats and dogs with names like Freddie and Porkchop. There is nothing he enjoyed more than walking the dogs and meeting up with his fellow dog lovers and friends at the local dog park at Millennium Park. Always one to look at things from a different perspective, Vinnie was also fascinated with the phenomenon call “Pareidolia” and enjoyed photographing animals and people’s faces in clouds.

Vinnie was predeceased by his mother, Annabelle Olson, whom he devotedly cared for at her home for the last 10 years of her life, and his adoptive father Oscar T. Olson and brother Carl H. Olson and sister-in-law Catherine Marie Olson.

He was beloved by his many nieces and nephews who often referred to him as “Crazy Uncle Vinnie”, Karen M. Olson of Easton, Paula M. Burbine of Port Orange, FL, Marcia A. Olson, Paul C. Olson, and Peter S. Olson, all of Stoughton, Lisa M. MacLean of Wethersfield, CT, David B. Olson of Middleboro, Patricia J. Olson of Foxboro, Eric J. Olson of Fishers, IN, the late Laura C. Olson of New Bedford, as well as 24 great nieces and nephews.
Vinnie is also remembered fondly by many relatives from Cape Breton and other parts of Canada including his first cousins Lewis MacDonald and his wife Maureen, and Dennis MacDonald and his wife Phyllis, as well as their children and grandchildren.

A memorial service will be held on Saturday, November 12 at 10 AM at the P.E. Murray-F.J. Higgins, George F. Doherty & Sons Funeral Home, 2000 Centre St., West Roxbury, MA. Relatives and friends are kindly invited to arrive at 9:30am. Interment in the Gardens at Gethsemane Cemetery, West Roxbury immediately following.

In lieu of flowers, expressions of sympathy may be made in Vinnie’s memory to the Animal Rescue League of Boston, 10 Chandler St., Boston , MA 02116 or the New England Center and Home for Veterans, 17 Court St., Boston, MA 02108.