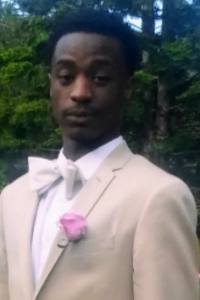 Elijah Malik Etienne, age 25 of Hyde Park unexpectedly transitioned in his sleep at home on October 31, 2022. Elijah was born in Boston on March 6, 1997 to Rose D. Etienne-Germain. He shared his birthday with his maternal grandmother, Marie Y. Louis, with whom he shared a special bond. As a longtime resident of Hyde Park, he attended Henry Grew Elementary School, William B. Rogers Middle School and later attended Charlestown High School.
Elijah had a passion for music and was naturally musically inclined. He was known to know all the lyrics to the songs he loved and even wrote some rhymes of his own.
He was also an avid foodie and expressed interest in cooking at a very young age. Elijah was multifaceted; he was funny, outgoing and vivacious, but equally introverted and introspective.
Elijah is he survived by his mother Rose D. Etienne-Germain and her husband Pierre Germain, his grandmother Marie Y. Louis, he is also survived by his older sister Sahradya Oracius and his younger brother Ethan Destin. Elijah is also survived by a loving community consisting of aunts: Bervelyne Louis-Rupp, Edwige Louis-Frost, Joanne Etienne and Gennie Etienne, his great aunt Antoinette Louis and his uncle John Y. Etienne.
Relatives and friends are invited to attend and may visit with Elijah's family at the church from 9 am until 10 prior to the funeral Mass at the Our Lady of Mount Carmel/Saint Angela's Church, 1548 Blue Hill Ave., Mattapan on Saturday, October 22 from 9 to 10am.
A funeral mass for Elijah will be celebrated at 10am.
Elijah will be laid to rest at Fairview Cemetery, Hyde Park.