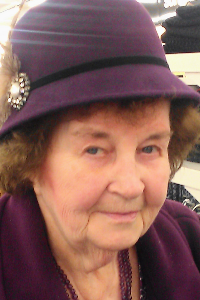 MONAGHAN Mary Theresa (O’Riordan) “Tessie” of Roslindale, more recently of Medfield passed away on October 24, 2022. Mary was born in Couscroum, Cahersiveen, Co. Kerry, Ireland on July 23,1935 to Hanorah “Nora” (Golden) and Timothy O’Riordan. They moved to London, England until 1938 when her sister Noreen Patricia was born March 21, 1938 and they had to leave in Sept. except their father because the war was breaking out and all women and children were told to leave.  Their father never contacted them or no one knew what happened to him since they had left England.  They moved in with their grandmother Mary (Connell) Golden, Couscroum for 6 months until their Uncle Mike got married.  Their Aunt Kate and Dan Barry in Derrynane Beg, Caherdaniel, took them in as Dan was struck by a big truck and injured his leg for many years so they were able to help work on their farm.  Aunt Kate and Dan were absolutely wonderful and generous to them as well as their other aunts & uncles.  She was very proud to be a grand niece of John Golden, a Fenian who was protecting Co. Kerry but was captured as a prisoner in 1867 and sent to Freemantle, Australia.  She went to Caherdaniel National School and walked a mile away and had a wonderful teacher Master Seamus O'Shea who taught her Gaelic, poems, songs, math, history, religion and geography.  He wanted his students to make up a dream and Tessie wrote a composition of going to Boston and who would know that she ended up there the rest of her life as she didn’t have any relatives there.  She left Derrynane Beg in 1949 and moved to Cahersiveen with her Aunt Joan and Mike O'Neill.  She worked for her aunt who ran a boarding house which had the Observatory School boys which was the weather station at the end of the town.  She also worked in the local shop/bar for Barbara (Sullivan) and Matthew O'Neill (and his sister Dina Quirke) who owned O'Neill's pub on East End in Cahersiveen.  In 1953 a friend of her mother indicated that there was a family in America who would like to claim someone for work so she allowed Tessie to go for a better opportunity.  She left at nearly age 18 on May 28, 1953 at Cobh, Co. Cork on The Cunard “Marsden” shipliner and arrived Hoboken, NJ on June 4, 1953 and was claimed by Mrs. Gardner Coolidge and worked for her daughter Natalie and John Keller in Chestnut Hill, MA.  One week after she left Ireland her mother Nora got ill with TB and was in a Tralee Hospital for 5 years and no one told her until she came back for a visit in 1956 where she could only visit her once a week by train.  Tessie and her sister Noreen saved enough money to send their mother to Lourdes, France in 1958 where she was cured of TB and lived until April 9, 1980.  Tessie was only given one lady to call when she arrived in Boston; Joan (Courtney) Costello who remained friends for many years.  She went to the Hibernian Hall on Dudley Street, Dudley Square, Roxbury, MA where there were Irish dances every week and she met Patrick (Paddy Joe) Monaghan who was born in Bohermore, Co. Galway Ireland (Nov. 16, 1929 to Apr. 7, 2022) and got married on July 11, 1959 settled in Brookline, MA moved to Roslindale, MA in 1962.  Seven children; Michael, James, Noreen, Patrick, Jr., Shaun, Kevin, Brendan and their dog Shannon.  Four daughter in laws; Christine Smith married to Michael (Ret U.S. Army, Enterprise, AL), Viola Ingram married to James (Ret Army National Guard, Hyde Park, MA), Joanne Morrissey married to Kevin (West Roxbury,  MA) and Paula Parise married to Brendan (Dedham, MA).  Nine grandchildren; Meagan, Melanie, James, Jr., Erin, Rebecca, Daniel, Kayla, Taylor and Tyler.  One great granddaughter; Morgan.  Mary grew up with the nick names “Tessie”, “Tess” ,“Nana Tess”, "Hat lady",  "The Queen" or "Marmalade lady" to this day.  She loved to cook, make dresses, flowers, church, shopping, English/Irish china, watching the grandkids, attending their sports/dancing events, volunteered at the kitchen of  St. Francis House for 25 years, walking in Boston, dancing and of course ready for a party or adventure to anywhere at a spontaneous moment.   She has left us great teachings & acts of kindness, fond memories and a proud legacy from her small town of Cahersiveen, Co. Kerry, Ireland to the big City of Boston, MA.

Visiting hours will be held at the P.E. Murray - F.J. Higgins, George F. Doherty & Sons Funeral Home 2000 Centre St. WEST ROXBURY on Friday, October 28th from 4-8pm. Funeral from the funeral home on Saturday, October 29th at 9:30am, followed by a Funeral Mass at St. John Chrysostom Church at 10:30am, Relatives and friends kindly invited. Interment at the St. James Section of St. Joseph Cemetery. In lieu of flowers please do an act of kindness and "Live a Great story”.