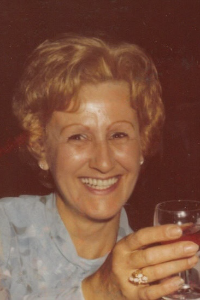 Jean S. (Smith) Govostes, age 91, a longtime resident of Winchester, formerly of Medford, passed away on October 24, 2022. She was the beloved wife for over 50 years of the late Edward F. Govostes until his death in 2009.

Born in Medford, Jean was the daughter of the late Ernest and Josephine (Masucci) Smith. She was raised in Medford by her dear aunt Esther Smith and was a graduate of Medford High School. After high school, she worked at Filene’s in Winchester Center for a time and enjoyed rollerskating at the Bal-A-Roue Rink in Medford. It was there that she met the love of her life, Ed. They married, and eventually moved to Winchester in 1956, where they raised their family. When the kids were older, Jean worked as an office manager at R.W. Hatfield in Woburn.

In her spare time, Jean enjoyed bowling on a league and ceramics. Jean and Ed traveled extensively to Europe, took yearly trips to Bermuda and spent time at their second house in Meredith, NH. In later years, she became a “Nana” and lovingly took care of her grandchildren while their parents worked.

Jean is lovingly survived by her children: Robert C. Govostes of Andover, NH, Linda S. Flaherty and her late husband Albert “Bert” of Londonderry, NH and Michael E. Govostes of Winchester. She was the devoted Nana of Marissa, Geoffrey, Bryan, Catherine and Abigail and the great-grandmother of Devyn, Chloe, Kristi and Matthew. She was also the dear sister of Robert Smith of Billerica, Shirley Collier and her husband Clifton of Medford and the late Ernest “Lefty” Smith, Esther “May” O’Connor, Rita Gliniak, Ruth Farinato, Joseph Smith and is further survived by many nieces and nephews. Relatives and friends are kindly invited to gather for Visiting Hours at the Costello Funeral Home, 177 Washington St., Winchester on Thursday, October 27, from 5-8 PM, and again on Friday, October 28 at 10AM, followed by burial in Wildwood Cemetery in Winchester at 11AM. In lieu of flowers, donations in Jean’s memory may be made to Care Dimensions Hospice, 75 Sylvan St. Suite B-102, Danvers, MA 01923. https.//www.caredimensions.org