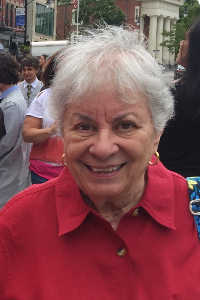 Dorothy Taylor, 90, of Clara Avenue, Warwick, passed away on Thursday, October 20th surrounded by her family. She was the wife of Philip B. Taylor. They had been married for 67 years.

Born in Fairhaven, MA, a daughter of the late Joseph and Clementina (Perry) Melo. She had lived in Warwick for 56 years previously living in Providence.
Dorothy had been an Executive Secretary with Eastern Electric for 4 years before marrying her husband and raising her family.

She was a graduate of Fairhaven High School and New England Stenotype Institute. She was a member of the First Baptist Church of Fairhaven.

Besides her husband, Philip, she leaves her sons, Christian B. Taylor and his wife Michele of Blackstone and Philip J. Taylor and his wife Paula of Cranston. She is also survived by other family members Edwina Melo of Fairhaven, Joe Melo of Quincy and Edwina Fisher of South Dartmouth. She was the grandmother of Christian B. Taylor Jr. and his wife Amanda of Sevierville, TN, Julie Brunelle and her husband Steven of Hope, Philip Taylor of Cranston and Kianna Taylor of Cranston. She was the great-grandmother of Chloe Prefontaine (Taylor) of Cranston and Stella and Jemma Brunelle of Hope.

Her funeral was private. In lieu of flowers, donations in her memory may be made to the Salvation Army, 386 Broad Street, Providence, RI www.salvationarmyusa.org