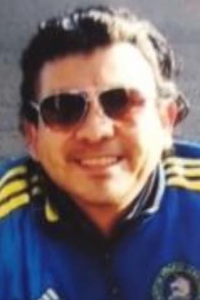 Jesus Jimenez Morales, known fondly by his friends as J.J., age 49, passed away peacefully at the home that he shared with his wife Catherine Davidson.

J.J. was born and raised in Oaxaca, Mexico, where he was known by friends and family as “Chuy”; and was the son of Noe Figueroa and Monica Morales, the grandson of Martha Viloria Garcia, the brother of Monika Jimenez Morales, Miriam Morales, and Noe Morales. It was in Oaxaca that he won a full scholarship to Harvard University, which would lead to his life in, and love of, Boston. He settled in Boston, where he discovered a love for cooking; the kitchen became his life passion. He made his mark early in fine dining, working in restaurants such as East Coast Grill, L’Espalier, Salamander, and Taranta. In this industry, J.J made many lifelong friends that were near and dear to his heart. Most recently, J.J. found his dream job as the head chef of the Boston Garden. J.J. and Catherine were also working towards the grand opening of C-town Burros in the Foundation Kitchen in Charlestown.

Along with his love of Boston, came a fondness for the Boston Red Sox; he loved everything about them. But, his love for his family, children, and grandchildren far surpassed his affection for anything else. He loved being a father to both Joao and Maria, adored being Abuelo to his 5 grandchildren, and was his happiest when visiting the children. He loved Sundays which were family days. Tom and Bill would bring their families, and the house would be filled with music, food, laughter, and joy. Jesus became an American Citizen in the summer of 2022. His son, Joao (Seaman U.S. Navy), is also a proud American, and a passionate Bostonian. He has a love of food, music, and the beloved Red Sox; all of which he attributes to Jesus. Maria’s fondest memory of her father is of being in the kitchen together. Maria inherited his passion for education, as shown throughout her time at U-Mass Amherst, as well as his ambition and drive. Jesus was an animal lover, and found great companionship in his pets Teisha and Jakie. J.J and Catherine found great comfort in their shared love of Jesus Christ.

Relatives and friends are invited to attend J.J.’s visiting hours on Thursday, October 27, 2022 from 4 P.M. to 6 P.M. followed by his Funeral Service at 6 P.M. in The Carr Funeral Home, 220 Bunker Hill St. Charlestown. His burial will be private.