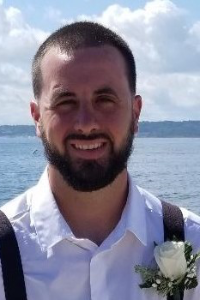 Kevin J. Nasuti 31, of Pascoag, RI and a former resident of Blackstone, passed away peacefully, surrounded by his family, Thursday October 20, 2022 following a courageous battle against kidney cancer. He was the beloved husband of Nicole M. "Nikki" (Caruso) Nasuti and the cherished son of Peter J. and Kathleen E. (Keeley) Nasuti of Blackstone.

Born July 11, 1991, in Worcester, he was raised and educated in Blackstone and was currently working for GPL Construction. He was a member of Local 271.

Kevin was devoted to his family and always made sure to have something exciting planned on the weekends for his children. He was a husband, father, brother and friend.

He enjoyed playing golf, family trips to Florida and New Hampshire, following all the New England sports teams and competing in fantasy football with his brother, son and his coworkers.

In addition to his wife and parents, he is survived by his son’s; Cove, Niko and Nash Nasuti, brother Matthew Nasuti, sister Jessica Nasuti and her fiancé Shane Harnois, niece & nephew, Chloe and Cameron Welch.

Relatives and friends are invited to attend his funeral Thursday Oct. 27, 2022 at 10AM from the Charles F. Oteri and Son Franklin Funeral Home 33 Cottage St. followed by a funeral Mass in St. Mary's Church, Franklin at 11AM.

Interment at St. Mary's Cemetery will be held at a later date.

Calling hours are Wednesday Oct. 26th, from 4-8 at the funeral home.

In lieu of flowers, donations in his memory may be sent to St. Jude Children’s Research Hospital 501 St. Jude Place Memphis, TN 38105.