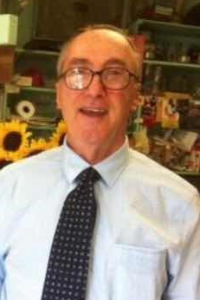 
Thomas William Kauycheck, born May 20, 1941, in Boston, Massachusetts passed away on October 10th, 2022 at Massachusetts General Hospital. Tom was a lifelong resident of Boston, raised in the West End and then for many years a dedicated member of the Bay Village community, where he was instrumental in establishing and maintaining the neighborhood's beauty.

Tom was the son of John and Helen Kauycheck (Krupcheck) of Boston. He was preceded in death by his parents, and siblings Paul Krupcheck, Mary L. Sullivan (Edward), and John Krupcheck (Patricia).

He is reunited now with his beloved cat of 19 years, "Pepper".

Tom is survived by his siblings Joan Chelmo (David) of Pembroke, New Hampshire and James Kauycheck of Charlestown and Haverhill, MA. Survivors also include many nieces, nephews, and dear friends and neighbors of the Bay Village community.

Tom was a 1959 graduate of Boston Trade School. Tom began his career as an usher at the Metropolitan Theatre, advancing to become the manager of the renamed Music Hall Theatre. He also managed the Cinema 57 and Cheri theaters. At each stop along the way, Tom had a positive and lasting impact on the lives of his crews, from his first to his last. He celebrated their successes and watched in amazement as they aged while he stayed forever 28 years old. He remained in contact with many of them, a tribute to his importance in their lives. He was also greatly respected by everyone he reported to, up to and including Ben Sack, as well as those in neighboring establishments.

In addition to his career at the theaters, Tom was an avid gardener. He lovingly tended to the Bay Village Garden and very proudly received First Place in Mayor Menino's Garden Contest in 2009. In his retirement, Tom was a staple at Bella Florist in Bay Village, where he could often be found helping out and enjoying the company of his great friends there.

Most importantly, Tom was the ultimate neighbor and friend. He had a profound impact on the lives of his neighbors, and he will be greatly missed by many. Our memories of Tom as a faithful friend and neighbor will live on fondly in our hearts forever.

Visitation and prayer service will be held Sunday October 23rd at Casper Funeral Home in South Boston from 12:00 PM to 3:00 PM. A memorial service in celebration of Tom's life will be held in Bay Village, the date is yet to be determined.

In lieu of flowers, memorial contributions may be made to Kitty Connection Inc., Medford, MA, and to Animal Rescue League of Boston, where Tom's cat Pepper was rescued.