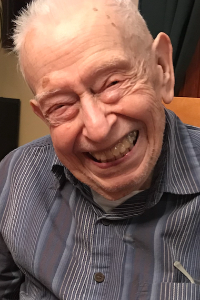 Stan was born December 12, 1928 in Bronx, New York City, NY to Morris and Gussie Youth. He was predeceased by his parents, brothers Ed, Hymie and George, and his wife Ruth.

At 17 years old, Stan joined the Army-Air Force on the GI bill and served until the end of WW2. He went on to study at New York University where he earned his degree in Aerospace Engineering. It was during this time he met and fell in love with Ruth (Aronson) and married in 1953. Stan started his career at Bell Aircraft in Buffalo, moved on to Grumman on Long Island, and then in 1972 began his career with Boeing, relocating his family to Bellevue, Washington, where he stayed until his retirement in 1992.

He was a loving, devoted husband and father to his wife Ruth, his children, Sharon (Paul), Susan, and Brian (Jane) and his grandchildren, Taylor (Kristen), Elliot (Aryana), Ian, and Eric.

Stan loved anything to do with aviation, was an avid traveler of the world (Japan, Australia, Tahiti, Spain, England, Hawaii to name a few), a voracious reader with a special love of poetry and a classical music enthusiast. He was a detailed and creative gardener, model boat/airplane builder, and enjoyed updating his homes by building furniture, decks, fences and many other home improvements projects.

Stan’s passion and appreciation for music was passed down to his children and he encouraged them to learn instruments at an early age. He adored animals and had deep affection for all the family pets. His love of chess was so important that he taught his children how to play when they were very young. Stan continued to play chess into the last months of his life.

Stan connected deeply with his community. He served as the unofficial “Santa Claus” in his neighborhood for over 30 years in both New York and Bellevue, WA, coached youth soccer, initially Brian’s team and then others, with Ruth managing the logistics and Susan as his assistant coach. He served as a volunteer math tutor at Vineland Elementary School, and served on the board of his HOA in Poulsbo, WA, where he also later served as president.

One of the most wonderful qualities Stan possessed was his sense of humor. He was easy-going, always in a good mood, and didn’t let the little things get him down. He was able to laugh and make others laugh even when his Parkinson’s was limiting his ability to do the things he enjoyed.

To all those who were fortunate to have known Stan you know what a special man he was, and he will be dearly missed. In his memory, please consider making a donation to the American Parkinson Disease Association (APDA) at https://www.apdaparkinson.org/1700d2l/.

A celebration of Stan’s life took place for family and some close friends on November 12th, 2022.


Private arrangements have been entrusted to Chad E. Poitras Cremation and Funeral Service, Buxton, www.mainefuneral.com
- Celebrating the Lives of Veterans -