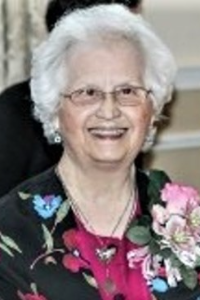 Anne C. Bercume 92, of Lake Worth Beach, Florida formerly of Worcester, Massachusetts passed away peacefully at home on Friday, October 7, 2022. She was born in Cambridge, MA to Maizie Marie (Mimms) and George Douglas Peterson and had lived in Worcester and Webster for most of her life prior to moving to Florida in 2017.

As a Golden Girl (inside joke) she loved the sunny weather, blue skies, green trees and flowers everywhere. Not to mention making many new friends with whom she enjoyed good times over these last few years. Attending the theatre, going to Bingo, enjoying concerts, pulling slots at the Casinos and basking in the sun at her favorite Parks and Beach were some of the highlights of her time in Florida, In particular, visits from her daughter, son-in-law, and granddaughters were treasured moments.

She was also the loving grandmother to Christina Curran of Weymouth Ma and Shannon Bernard and her husband, Aaron of Guilford, CT who were the lights of her life and source of great pride and joy. Blessed beyond words, she was also the loving great grandmother to two adorable great grandsons William and Connor, her little cuties she would call them who brought her immense happiness more than words can express. Her family and friends meant everything to her. In addition to her children and grandchildren she is survived by a sister Carol Wade and her husband, Kim of Bar Harbor, ME as well as many nieces and nephews.

Apart from death of her husband Euclid Albert Bercume (the love of her life) in 1974, she was predeceased by her mother Marie Milner in 2000, her brother Charles Edward Baylis of Poughkeepsie, NY in 1976 and her father Carl Haas and his wife Isabel as well many dear and close friends.

She graduated from Commerce High School in Worcester with the class of 1948 B. where upon graduation she went to work for several notable Worcester area companies. These included Lowell Wrench, Norton Company, Heald Machine and the old Kresge and Grants to name a few. It was during these early work years, that she would meet her future husband while dancing at the old Lakeside Ballroom in Worcester, MA.

After enlisting in the military, dad went to serve his country in the Korean War.
As was promised and upon his return from Korea, they were married in June 1953 at St. Margaret Mary’s Church in Worcester, MA with the reception at the old Aurora Hotel in downtown Worcester. As a military wife and mother, she lived and worked abroad in England and Spain and at various military bases and locations throughout the United States that included Illinois and Texas.

She spent the majority of her latter years prior to retiring as a full time cashier for Big D Supermarkets on Mill Street in Worcester, MA.

After retiring, she became involved in many fun activities both as a member of the Coes’ Pond Village 39rs and Worcester Red Hat Society where she made many friends. Her friends Peg, Ruth and especially Lorraine were important to her. They were like sisters and were always there for her.

Mom loved to travel and had many adventures throughout her life. Whether it was a trip abroad or in the states she was rearing to go whenever the opportunity would present itself. Two particular highlights of these many trips included meeting one of her favorite actresses Debbie Reynolds in Las Vegas and seeing Princess Diana outside Westminster Abbey in London.
Best of all was the cherished time spent with her daughter, granddaughters, her sons, their spouses and extended family. She was not only our mother but our best friend.

Mom was an amazing cook and unbelievably hard worker. Everyone that knew her considered her one of the sweetest people you could ever want to meet. A gentle fun soul who was always willing to have a good time. Dancing, music, completing puzzles, long car rides and being with friends were always her favorite.

She was graced with many new friends and extended family during her time spent in Florida such as Linda, John, Lilly, Wendy, Gail, & Robin to name a few.
When asked if she regretted coming to Florida, she would always say “NO, I love it here! Not to mention she did become a fan of a good Lemon Drop Martini. Nod to Wendy.

Our hearts are forever broken and she will be forever missed. We ask you all to keep her in your thoughts and prayers.
You were the light of our life Mom. Hugs, Kisses and Love until the end of time. Xoxoxo. Love Always and Forever your children Sandy, Allen and Albert.

The family would like to invite you to a Breakfast Reception on Monday Nov. 7th at 8:30 am at St. Roch’s Church Hall, 332 Main Street, Oxford, MA. A funeral mass will follow at 10:00 am at St Roch’s Church. A private burial service will be held after Mass.