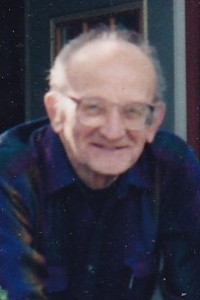 He was born at home on September 13, 1925 in Webster, the youngest child of Theodore J. and Clementine (Dukiet) Nowicki and was a life-long resident. He attended Saint Joseph Elementary School and was a 1943 graduate of Bartlett High School. He was a member of Saint Joseph Basilica his whole life.

A proud American, Mr. Nowicki was a Navy veteran of World War II. Prior to his military service he was an airplane spotter in the Air Warning Corps in Webster. He was a member of the Webster-Dudley American Legion, the Polish American Veterans, and the Veterans of Foreign Wars all of Webster, and a life member of the Auburn-Webster Lodge of Elks #2118. He is listed in “Who’s Who in America 2022”.

He worked as the manager of the meat department at the Worcester A&P for 30 years and then was a custodian at Bartlett High School for 23 years retiring in 2000.

He enjoyed hunting, fishing, gardening and woodworking and was an avid sports fan. Over the years, he and his wife logged many miles exploring New England, Long Island and Canada. They enjoyed dining out and until recently went out to breakfast daily, visiting with friends and catching up on the local news.

Al had a heart of gold and was a kind and generous man. He had great stories which come from a life well lived, that he loved to share. He will be missed, even by his little buddies Fritz the cat and Baxter the dog.

A graveside service with military honors performed by the Webster-Dudley Veterans Council will take place on Monday, October 24, at 11:00 AM in Saint Joseph Garden of Peace, Webster. Donations in his memory may be made to the Webster-Dudley Veterans Council, 4 Veterans Way, Webster, MA 01570. Funeral arrangements are under the direction of Sitkowski, Malboeuf & Hickey Funeral Home, 340 School Street, Webster.